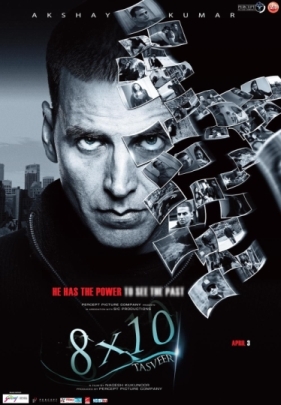 Jai (Akshay Kumar) is an NRI (nonresident Indian) who works as a forest ranger in Canada. He has a live-in girlfriend, and is estranged from his father, an oil company executive, because he believes that his dad's business harms the environment. The girlfriend does not know that he has a secret power, a form of psychometry: if he focuses on a person in a photo, he can experience their memories of the minutes before and after the taking of the photo. This is physically exhausting for him at best, and life-threatening at worst, but he occasionally uses it to finds missing persons lost in the wilderness. Things get complicated when Jai's dad has a photo taken of himself and his three best friends, then almost immediately dies of a heart attack after falling off his yacht into cold water. An eccentric detective shows up, insisting that the death was murder. Jai is skeptical at first, but finds himself, his girlfriend, and his mother (Sharmila Tagore) drawn into a web of mystery and deceit, with the story of his father's death growing more complicated every time he digs into it with his psychic powers.

8x10 Tasveer ("8x10 Picture") suffered from a Troubled Production and an unsuccessful theatrical release, but it is a fairly good, if slow-moving, thriller that ditches the standard Bollywood dance numbers and Large Ham acting for a brooding atmosphere, understated performances, and a whole lot of plot twists. It can be legally viewed for free, with subtitles, on youtube, here

Warning: the trope list contains a bunch of spoilers.