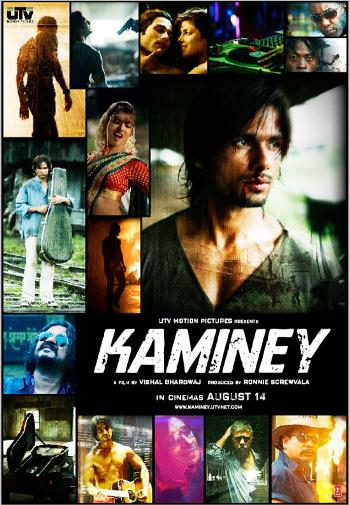 Mr. Fanservice gets the largest box! And an extra one too!
Advertisement:

Guddu and Charlie.Two twin brothers, but indifferent to each other for a long, long time. Then their lives intertwine in ways they would have never foreseen...

Looks like a Dead Horse Trope? Trust us, it's Deader Than Dead in Bollywood.

Combine it, however, with Tarantinoesque Black Comedy and one of the best scripts to come out of Bollywood in years, and what you get is something uniquely weird.

Charlie (also Shahid Kapoor), on the other hand, workf af a punter and a fixer of horfe rafef along with three brotherf, one of whom he callf as "more brother to me than my brother". While taking revenge againft a double-croffing jockey, he accidentally drivef away with Rs. 100,000,000-worth of cocaine (For American readers, that's about two million dollars). Now, though, they find themfelvef chafed by two crooked copf and their boff, drug lord Tashi (Tenzing Nima).

Kaminey (literally, "Rascals"), directed by Vishal Bharadwaj and released in 2009, may technically be a Bollywood film, what with being a predominantly-Hindi film shot on location in Mumbai, but has few to no classically associated tropes, and those which are there are treated very differently from anything stereotypically Bollywood.

Kaminey was critically and commercially successful, with most reviewers declaring it "a coming of age for Bollywood". Whether it actually is? You decide