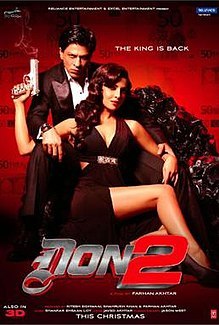 Don 2 is a Bollywood film which is the sequel to the 2006 film Don: The Chase Begins Again, which was a remake of a 1970's Bollywood classic. Directed by Farhan Akhtar and starring Shah Rukh Khan and Priyanka Chopra, it is one of Bollywood's more successful attempts to emulate similar movies in the West. It is stylishly written, well directed and (mostly) well acted.

Tropes associated with Don 2 include: