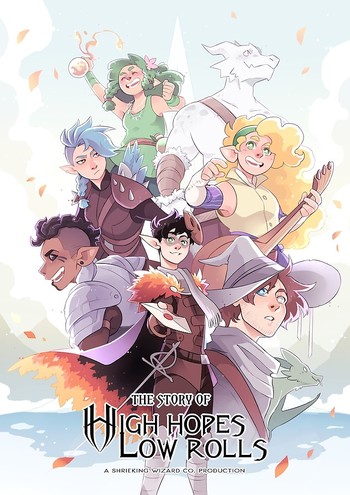 High Hopes, Low Rolls is an animated series retelling the tale of a group of Dungeons & Dragons players' campaign based loosely on the Tyranny of Dragons adventure.

Foul events have ravaged the continent of Arcadon. In the north, tales of dragons and war spread, and in the south, the town of Bay Hollow has been burned to ashes. Determined to bring the perpetrators to justice, Paddock Whitlaw, last son of the noble Whitlaw family, has joined a party of adventurers on a mission from the mayor of the Free State of Kadar. Will they fall prey to the great evils that are infecting the world, or will they maintain High Hopes?

The series is written and narrated by the group's Dungeon Master, Jenny Budd, drawn by Alex Brennan-Dent (Also known as ABD Illustrates

), and features the voices of the rest of the party. The first episode was dropped September 13th, 2019.

The series can be found on ABDIllustrates's youtube channel

and was later reformatted as a comic on Webtoon, which can be found here

The story also has a Tumblr

The series also has a Redbubble store

Unfortunately, production of the story was halted in early 2022 with the disbanding of the Shrieking Wizard Company, due to not having enough time or money to continue working on it.