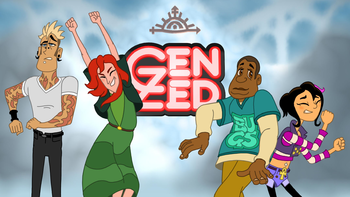 The party starts soon.note Or does it?
"They grew up. Now they're wondering why they bothered."
— Tagline of the show
Advertisement:

is (was?) an upcoming animated comedy show about a young trans woman who wants to be a stand up comic & her online friends who all move in together. It is written and directed by Hayden Black of Goodnight Burbank fame, which he also did.

It focuses on protagonist Shona Sommers, a 19 year old trans woman living in Downtown Los Angeles with her friends in a loft. Shona aspires to be an “edgy” stand-up comedian, while her other friends/roommates embody various millennial stereotypes, such as Cameron, described as a “shit poet” and nerd; Huey, a tattooed musician prone to acting like a “douchebag;” and Betsy, an Asian-American heiress to millions of dollars who’s addicted to prescription drugs and aspires to be a fashion designer.

The show's pilot was set to be released some time in 2016 according to the show's now defunct website, but nothing has come of it as we move into the 2020s.