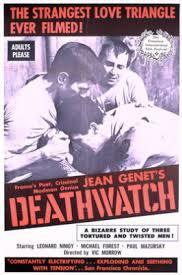 A 1966 English language film directed by Vic Morrow, adapted from a play written by Jean Genet.

While incarcerated in a hellish French prison, petty thief Lefranc (Leonard Nimoy) competes with his cellmate Maurice (Paul Mazursky) for the attentions of their third cellmate, the murderer Greeneyes (Michael Forest).

This movie provides examples of :