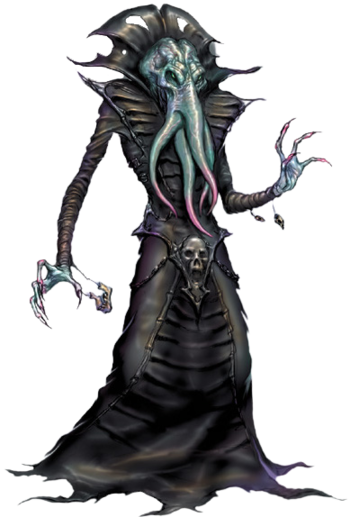 A monster with a face of tentacles resembling everyone's favorite Eldritch Abomination, Cthulhu. Using the official pronunciation of "Cthulhu" given by H. P. Lovecraft, the closest thing to the correct pronunciation the human vocal apparatus can manage is "Khlulhloominoid."note Cu thoo loo om in oid, in case you actually wanted to try! Now say that five times fast.
Advertisement:

Different variations exist. The being(s) may have tentacled fingers, or they may have completely normal fingers. They almost always have an unusual skin pigmentation such as green, grey, greenish grey, or orange. They might have a beak within their mass of tentacles like a real octopus, or a Lamprey Mouth concealed among them; alternately, they might have a humanoid mouth just above or below the tentacles. Their strength varies, but they are almost never of the same power level as the Eldritch Abomination that inspired them. In fact, they may act nothing at all like the original Cthulhu, but still, expect them to be compared to such by fans.

Also note, while examples may or may not be supernaturally enhanced, this is not about Eldritch Abominations, but about humanoids who look vaguely like Cthulhu.

A Sub-Trope of Monster Mouth, since it's mostly about the structure of the mouthparts. Related to Unscaled Merfolk, Fish People, Beast Man, Humanoid Abomination, Animalistic Abomination.

Lance's design is ripe with tentacles, with his One-Winged Angel-form delving into Eldritch Abomination territory.

Lance's design is ripe with tentacles, with his One-Winged Angel-form delving into Eldritch Abomination territory.