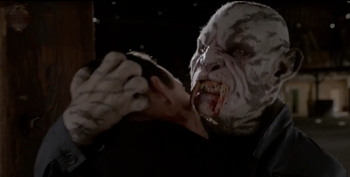 Marnassier is no ordinary assassin.
"Gangbangers and meth addicts don't make good fighters. They don't even know how to die. Where's the sport in that?"
—Leo Taymor, "Last Grimm Standing"
Advertisement:

Nick Burkhardt and company have faced many Wesen and other villians. Here are the most monstrous.