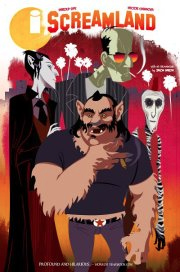 Hollywood is just full of monsters.
Andrea: Frank, the monsters always lose. That's why people can watch these things, because in the end we always win. If not, it would become-''
Frank: Real life. It would become real life.
Advertisement:

Screamland is a comic written by Harold Sipe and illustrated by Hector Casanova. It tells the story of a group of monster actors as they struggle to get work in an age where people prefer make-up and computer effects to actual monsters.

A sequel, Death of the Party, following The Wolfman and a group of B-list monsters as they attempt to solve a murder mystery, was published in 2011.