Character page for the Fallout series.

One day, a shotgun-toting man in a leather jacket walked into Junktown with his dog. The man was killed by thugs and the dog was left all alone. When another traveler walked into town a month later and befriended him, Dogmeat decided to follow the traveler to the ends of the Earth — it so happens this second traveler was the Player Character of the first Fallout game.

According to the manual for Fallout 2 where the Vault Dweller recounts his adventures, Dogmeat died running into a force field in the Mariposa Military Base, but returned in Fallout 2 in an optional random encounter to aid the Chosen One. In Fallout 3 the Lone Wanderer finds Dogmeat in a junkyard, and Word of God is that somehow this is a descendant of the original Dogmeat. Another Dogmeat appears in Fallout 4, but he is (apparently) not related to the original Dogmeat family line and just happens to have the same name. 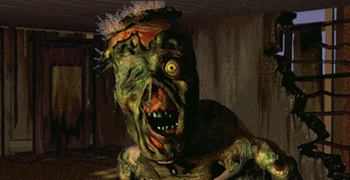 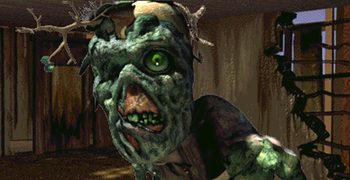 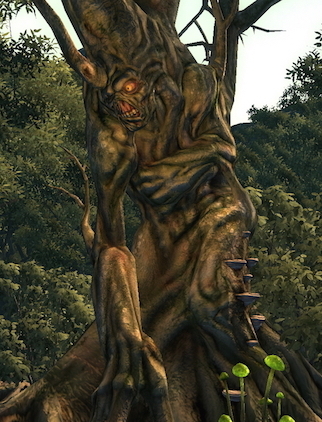 A person horribly mutated by FEV, he resembles a ghoul pretty strongly, aside from having a plant growing from his head. The plant's name is Bob, but he calls it Herbert... which is pretty sophisticated humor coming from a man with a root system entrenched in his brain. In the first game, he's a beggar in the Hub who provides information to the player for a price. In the second game he becomes mayor of Gecko, a city of ghouls. By the third game he's migrated to the Capital Wasteland, but Bob has grown too much and he literally puts down permanent roots, Bob growing into a massive forest with Harold as the central hub of the network.

The mascot of Vault-Tec and of the Fallout franchise. With a Vault Suit on his back and a smile on his face, Vault Boy is plastered all over merchandise, menu icons, and posters in-universe, beckoning civilians to a new life in the safety of a Vault-Tec bunker. 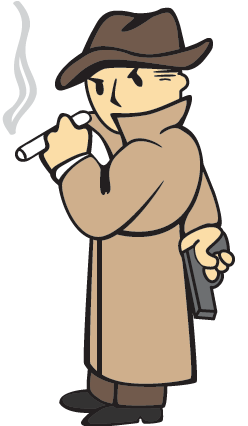 He is many things: an unexpected ally, a strange gunslinger, a guardian angel. Appearing to those in need, he lets off a quick shot (only one is needed) and disappears just as fast. He is... the Mysterious Stranger. 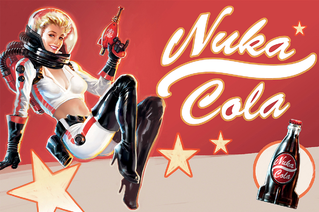 A beverage manufacturing company before the Great War, Nuka-Cola was the brand of soft drink for the United States, and really the entire world. Nuka-Cola vending machines could be found on street corners, the company had its own soda-centric theme park called Nuka-World, and their dominance in the soft drink market was without question. So widespread were their beverages that, two hundred years later, Nuka-Cola bottles can still be found in abundance in old vending machines and collapsed ruins — most bottles left of it are warm and flat now, not to mention irradiated like every other food item from before the war, but Nuka-Cola is still the soft drink of choice for the post-apocalyptic United States.

"The Vaults were never meant to save anyone..."

Vault-Tec was a pre-War military contracting company so influential in the United States that it was basically an auxiliary branch of the Pentagon. As part of the government's initiative to ensure the survival of the United States citizens in the event a nuclear holocaust occurred, Vault-Tec constructed a number of massive underground bunkers called "Vaults", that would provide shelter for civilians if, when, the bombs came. At least, that's the story told to the public — the reality is the Vaults were a ploy to get groups of humans into a confined space for various scientific and sociological experiments, with the data to be put towards how the Enclave could and should rebuild civilization after the dust of the bombs settles. 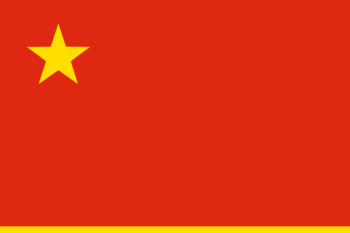 Also known as the PRC or just "China", the People's Republic of China was a Communist state located in eastern Asia that became opposed to both the Soviet Union and United States during the Cold War. They became the US' primary geopolitical rival, eventually invading Alaska for the last known supply of crude oil on Earth and sparking the Resource Wars (which in turn would eventually cause the Great War). 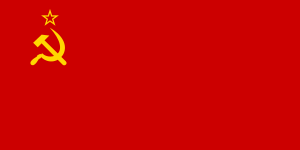 Better known as the "Soviet Union" or abbreviated as the "U.S.S.R.", the Union of Soviet Socialist Republics was a Communist state located in Eastern Europe and northern Asia that led the Warsaw Pact. Originally the United States' primary foe in the Cold War, they were eventually supplanted by the People's Republic of China. 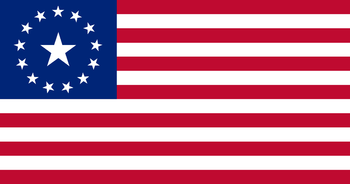 Also known as the USA or just the "United States", the United States of America was a representative democratic republic with a market capitalism-based economy located in North America (along with holdings in the Pacific Ocean thanks to the presence of Hawai'i). Ostensibly democratic, in reality the United States had long since devolved into a fascist hyper-capitalist hellhole obsessed with stamping out Communism forever and securing the government’s continued existence at the expense of its own citizenry.

The Brotherhood of Steel

"Steel be with you."

Before the bombs fell, a group of U.S. Army soldiers under the command of Captain Roger Maxson staged a mutiny at Mariposa Military Base after figuring out about the immoral experiments being performed there. Declaring themselves independent from the U.S. government, their rebellion never got off the ground due to the bombs dropping and wiping out the polity known as the United States soon after. The defectors, safe in the underground confines of the base, survived and came to the surface and reconnected with other survivors, then headed to the Lost Hills bunker to start anew. Thus began the Brotherhood of Steel, a pseudo-religious, pseudo-medieval military society of humans that believe in the power of technology and the fallibility of man. 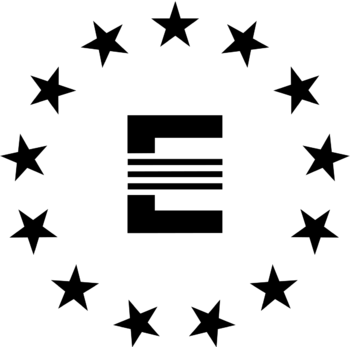 "One Enclave, one America, now and forever."

Before the Great War, the Enclave was a secret cabal of wealthy industrialists, members of the military and influential politicians who operated in the shadows and held a great degree of control over the United States' government. Knowing that a massively destructive nuclear war would inevitably happen at some point, they masterminded the Vault project; on the surface a project to protect the US population from destruction, but in fact was a social experiment on a massive scale, meant to determine how isolated populations would behave under different circumstances. Finally, as the world situation started heating up, they sequestered themselves into secret bunkers and other hidden fortresses months in advance of the nuclear exchange, with their main headquarters being an oil rig dubbed "Control Station ENCLAVE" off the coast of California. Thanks to these preparations, they survived. They emerged to form the Enclave, proudly declaring themselves the last bastion of pure humanity and the heirs to the legacy of America. 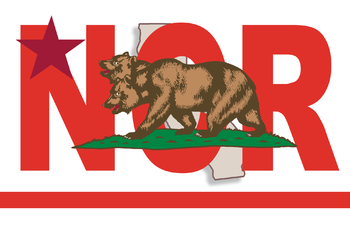 "A safe people is a strong people."

Fifty years after the Great War, Vault 15 opened and its people splintered in raider groups and one small town, Shady Sands. Over time under the leadership of their elder Aradesh and his daugther Tandi, Shady Sands became a major economic power in the southwest, and united with other major hubs of civilization in the area to found the New California Republic. Over the decades, the NCR has expanded across much of California and become its push into Nevada, coming into conflict with Caesar's Legion and the city of New Vegas under the leadership of Robert House.

For more on their depiction in New Vegas specifically, see here.

The Church of the Children of Atom 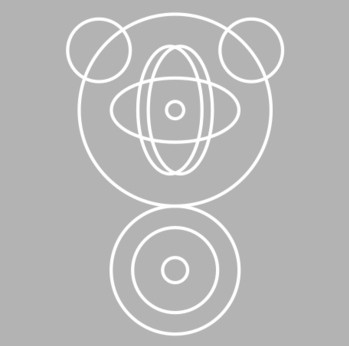 The Church of the Children of Atom are, more than anything else, an exceptionally odd bunch of people that serve as an excellent example of the Fallout franchise's Atompunk themes being taken to their (il)logical conclusion. The earliest known records of them has them starting out as a small cult of harmless weirdoes in the Capital Wasteland town of Megaton, viewing the unexploded nuclear bomb in the town's center as an altar to their god "Atom". In the Children's belief system, each nucleus contains its own entire universe, and nuclear fission (or, as they call it, "Division") is an inherently creative act, with two new universes being created every time an atom splits. As such, they worship the creative and mutative properties of radiation (who they have personified as Atom) and aspire to "embrace Division" so as to create new entire worlds and be with their god in everlasting peace. As the series goes on, they increasingly swell in ranks, spreading as far north as the Commonwealth and Mount Desert Island in Maine, but unfortunately also gain a lot of xenophobia and rabid fanaticism as a result from their new followers.

For more on the sect of the Children of Atom found on The Island, see here. 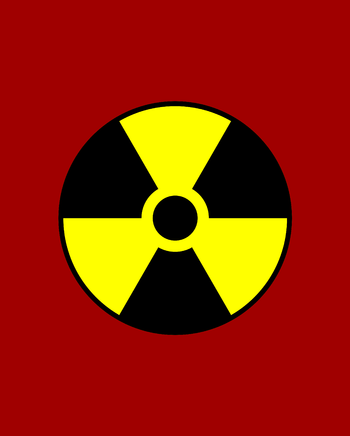 The Unity, also called the Master's army, is a force of super mutants and human cultists created by the Master, a horrifically mutated individual seeking to transform the human species into a new, "perfect" form adapted to thriving in the Wasteland. The Unity includes a number of subdivisions, including the mutant armies proper and the Children of the Cathedral, a religious branch meant to spread the Master's message and prepare wasteland communities for the eventual takeover.

The Unity largely fell apart after the Master's death, with its surviving members either reintegrating into society or striking out in the wilderness.

Rather than referring to a single cohesive group, "raider" is the catch-all term for the bandits, renegades and ne'er-do-wells found in the wasteland. Most of the time, these gangs barely have any connection to each other and instead act only in favor of themselves. What they do all share in common, though, is an attraction to murder, torture, mugging, rape, and raiding the more honest people of the wasteland.

Most raider gangs are improvised and short-lived affairs, arising from a handful of thugs banding together and rarely lasting long before being brought down by infighting, retaliation from stronger forces or the dangers of the wastelands. A few, however, manage to endure in the longer term, eventually growing in numbers and developing into primitive tribes in their own right with some cultural nuance beyond being thieves and killers.

Archetypical little green men with ray guns and flying saucers, they've apparently been monitoring the Earth for centuries, abducting us and studying us for unknown reasons. Aliens and/or their technology feature repeatedly in the series as Easter Eggs. 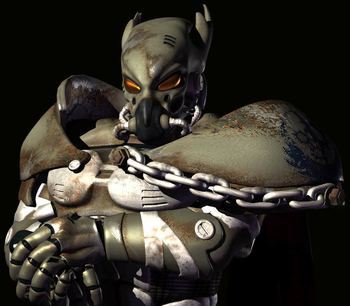 The Fallout Tactics player character, a Tribal recruited into the Brotherhood of Steel and chosen to be a squad leader over several other Wasteland recruits.

The Warrior's initial commanding officer, General Barnaky gives the player his missions and objectives. He's a gruff Drill Sergeant Nasty and will be quite harsh on the Warrior until they earn his respect with several successful mission completions.

The leader of the Super Mutant army and the initial major foe the Brotherhood of Steel faces. 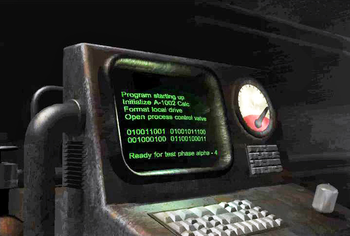 A computer overseer of Vault 0 and the leader of the robot army.
Fallout: Brotherhood of Steel