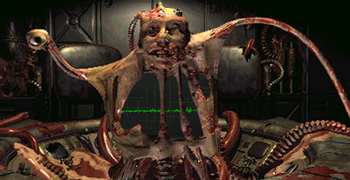 Not pictured: Creepy voices, Vault Dweller's brown underwear.
Burned out ruins of proud cities from a long gone age?
Bloodthirsty, giant, deformed creatures that once were ordinary humans and animals?
Old empty vaults with fading signs of the madness that once tore them up from the inside?
Oh yes, the Wasteland is indeed a scary place. While there may be much more content, and therefore, much more exploration and possibility for scares in Fallout 3 and beyond, the first few were legitimately terrifying in their own respects.

For added effect, play this theme