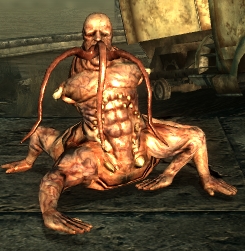 The Centaur, as it appears in this game and the next. Body Horror personified.

Despite its 'art major science' and moments of lighthearted goofiness, there are parts of Fallout 3 that make Silent Hill look like Mister Rogers' Neighborhood.