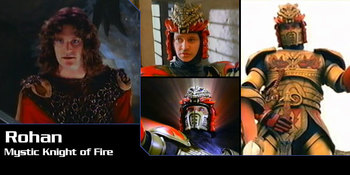 An orphan raised as Cathbad's apprentice before learning he was the long-awaited Chosen One Draganta, making him the leader by default. He is the only one who can control Pyre, the Dragon of Dare, whom he summons with the Dragon's Breath Dagger. Rohan revealed in one episode his heart's desire is to know who and where his real family is. Be Careful What You Wish For... 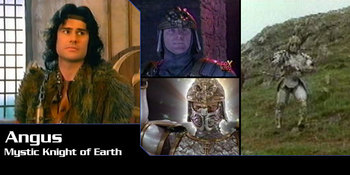 Rohan's best friend and roommate. The two grew up on the streets together, and Angus was — and still is — the troublemaker. Rohan trusts him unquestionably (the power of their friendship was once enough to free Rohan from a spell), despite his reputation as The Trickster and pickpocket. His skills in that area frequently come in handy. 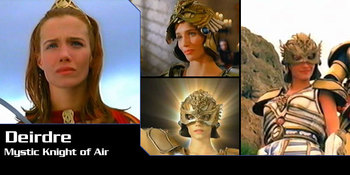 The Rebellious Princess of Kells, who finds herself a habitual blackmail tool. In the finale, it took all of one minute for Maeve to grab her and the knights to sulkily abandon their weapons as if it had become routine, which it had. Fortunately, no one in her world seemed to notice, any more than they were bothered by her tendency to pull rank whenever she wanted to get her way. ("That's a royal command.") 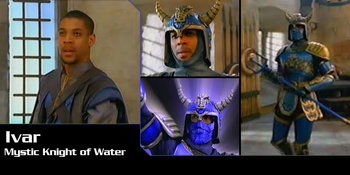 A prince who was passing through Kells on the hunt for a thief who stole a priceless chalice from his kingdom. He eventually learned that very chalice was located in Maeve's throne room, since it was Midar's portal between Earth and the Dark Fairy Realm. His dedication to retrieving the chalice almost matched his uncanny ability to track anything and everything.

Garrett, Mystic Knight of the Forest 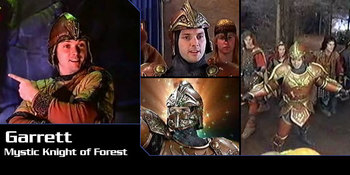 A Sixth Ranger who came to Kells to carry out his betrothal to Deirdre, who instantly shot him down due to his initial severe superiority complex. After a period of fighting the team after being Brainwashed by Maeve, Cathbad realized he was destined to be the fifth Mystic Knight. Deirdre firmly refused to go through with the marriage, but she tolerated him as a teammate, even giving him a kiss good-bye when he left almost as quickly as he came to escort a stranded princess home. 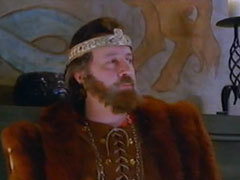 The ruler of Kells and father of Deirdre. 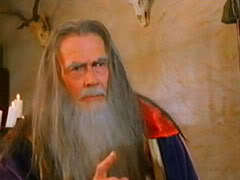 The druid of Kells. 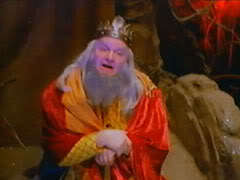 The fairy king of Tir Na Nog who gave the Mystic Knights their weapons and armor. They frequently came to him for help but more often than not heard Figure It Out Yourself, in riddle form. 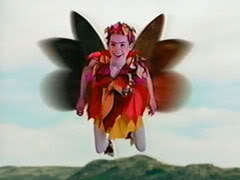 A Ninja Butterfly (no, seriously) who followed the Knights around, serving as a messenger and spy. She had a crush on Rohan that occasionally caused her to do foolish things, like having Maeve turn her human or accidentally turning Deirdre to stone. 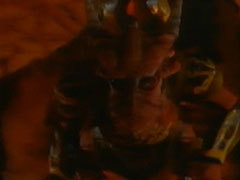 A red dragon who aids the knights in battle when they summon him with their daggers. 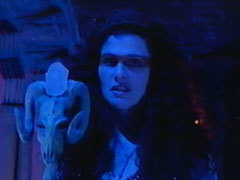 Maeve is the queen of Temra. She believes that being the ruler of Kells is her birthright, so she recruits the help of the dark fairy Mider. 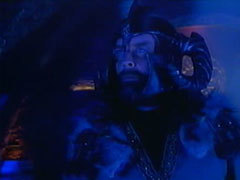 Queen Maeve's right-hand man. Before the series started, he was acting as The Mole for Maeve in king Conchobar's court before a young Rohan and Angus uncovered his treachery. He was revealed to be the one who stole Ivar's chalice. 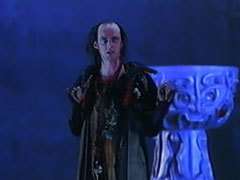 A dark fairy who wishes to take over the fairy kingdom of Tir Na Nog. To reach that goal, he allies with Queen Maeve and grants her the magical power to create monsters.

Four guardians created by Mider to prevent the Mystic Armour from being claimed and used against Temra. After their initial defeats at the hands of the Knights they were assembled into a team and sent out to antagonize the heroes.

Tropes associated with the Sentinels as a group:

The Ice Lord of Temra

The guardian of Rohan's armour, the Ice Lord is a skeletal figure wrapped in purple armour.

The Lightning Bat of Temra

The guardian of Dierdre's armour, the Lightning Bat comes armed with a magical boomerang and grating voice.

The Sea Serpent of Temra

The guardian of Ivar's armour, the Sea Serpent was a cackling sadist who held a grudge even better than the other Sentinels.

The Rock Wolf of Temra

The guardian of Angus' armour, the Rock Wolf was stupid, brutish, and completely uninterested in the world around him.