The Guys Shot Up In Space 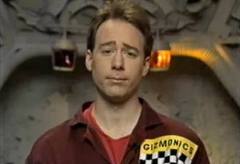 The original "guy shot up into space" and the creator of the robots. Joel was an employee at Gizmonic Institute, both a janitor and inventor. As part of Dr. Forrester's experiment, he was launched into space aboard the Satellite of Love and is forced to watch horrible movies. Joel has a rather laid-back personality, and as their creator, often acts as a father figure to the Bots. Halfway through Season 5, Joel escapes from the SoL and is replaced by Mike. Joel comes back for one episode later on, revealing that after his escape he settled down as the manager of a Hot Fish Shop in Osseo, Minnesota. 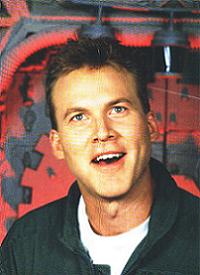 The second "guy shot up in space" after Joel escaped from the Satellite of Love halfway through Season 5. Mike Nelson is a lifelong temp-worker, bouncing from job to job. Only the coincidence of him being temped out to Deep 13 for their audit at the time of Joel's escape led to him being employed long-term by Dr. Forrester. He's described by Dr. Forrester as a "disgustingly mild-mannered dope". To the bots, he's seen as a big brother, college roommate type, or amicable coworker, depending on the situation. 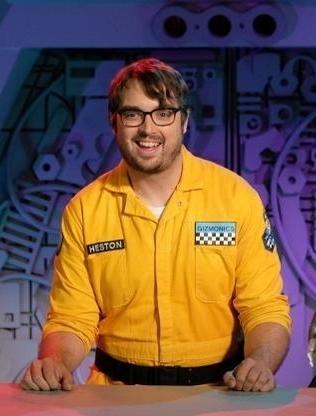 The third "guy shot up in space" and the first one of the revival. A former pilot for Gizmonic Institute where he was regarded as a Living Legend by the staff there. Initially seen by the bots as step-dad. 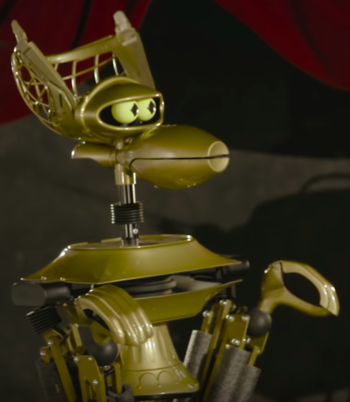 TV's wise-cracking Crow is a gold-colored hominid. His most obvious features are his pronounced beak made out of a bowling pin, and a hockey mask he wears as a head crest of sorts. He tends to be the most immature of the trio, generally acting out the most or getting into various types of trouble, referred to as "an unathletic nerd" by Mike and Servo. He also fancies himself a bit of an amateur screenwriter, and a Running Gag on the program is him routinely pitching new scripts at the other two. He sits to Joel/Mike/Jonah's right in the theater. 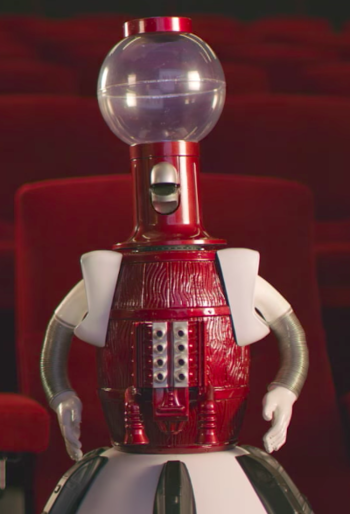 Tom Servo is a red robot. His most obvious feature is the fact that his head is a gumball machine. He also has inoperable arms on springs, and travels by floating on his hover-skirt. Despite these shortcomings, he's the most cultured of the crew and has a lovely singing voice. His jokes tend to be of the more intellectual type. He sits to Joel/Mike/Jonah's left in the theater, and is often (if not always) carried in.note Mike makes the rookie mistake of forgetting to carry in Servo during his first experiment, prompting Crow to explain there's an air grate that Tom's hoverskirt can't negotiate. When carrying him in, Tom mutters, "I've never been so embarrassed in all my life...!" 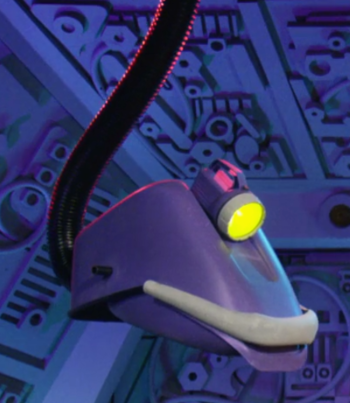 Gypsy was a robot built by Joel to service the higher functions of the ship. As such, she doesn't (typically) go into the theater with everyone else. She's basically a snake form, with a long black tube as a body, and her head is a baby's car seat attached so she kinda looks like a vacuum cleaner with a flashlight that serves as her eye. She has a huge crush on Richard Basehart. 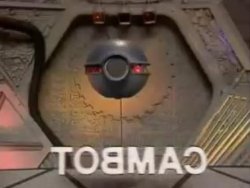 Played by: Kevin Murphy (KTMA), Joel Hodgson (seasons 1-5) and Michael J. Nelson (seasons 5-10), although he is only heard during Robot Roll Call in the official seasons.

Cambot serves as the camera on the Satellite of Love, projecting to the Mads in Deep 13. As such, he's never seen, never heard, and it's easy to forget he's even there, but he's obviously an essential member of the crew, without whom we wouldn't see all the wacky hijinx on the Satellite. 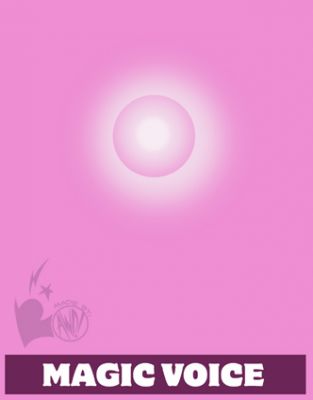 Magic Voice is a female, disembodied voice who resides in the Satellite of Love, and whose main task is to announce when commercial sign is coming up and otherwise make the occasional comment on the action. It's never revealed exactly what she is, but seems to be robotic in nature, given how Joel was able to reprogram her along with the other 'Bots. The most common fan theory is that she's the ship's computer. 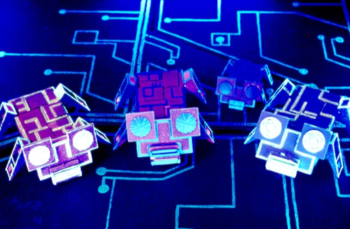 Something Crow picked up in the 500 year time gap between season 7 and 8 at a space carnival, he only got two of them, but they reproduced like sea monkeys do, and there are now billions of them on the Satellite of Love. They're capable of almost anything, but are rather unwilling to do anything without a work order.
M. Waverly 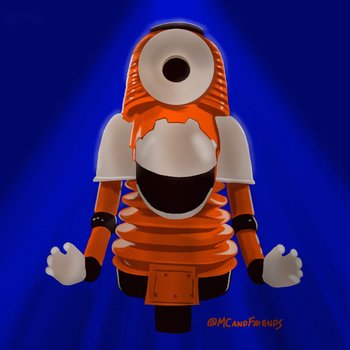 Played by: Grant Baciocco (seasons 11-)
Built by Jonah in Season 11 as a new companion on the Satellite of Love, M. Waverly tries his hardest to fit in with the humorous antics of the other Bots but mostly goes unappreciated.
Growler 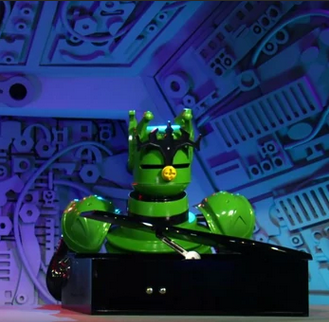 Played by: Russ Walko (seasons 11-)
Another robot introduced by Jonah in Season 11. Growler is a laid-back robot who enjoys playing the piano and doesn't sweat the small stuff. 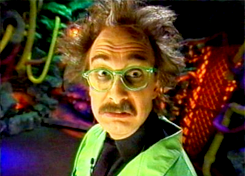 Dr. Forrester is the green-coated head scientist down in Deep 13 who oversees the experiment on the Satellite of Love. While he's evil with a capital E, he's also not particularly effective, given how after several years, he still has yet to find that perfect movie that will drive people insane. Oftentimes, the relationship between Dr. F and the folks on the Satellite tends to be strangely amicable. 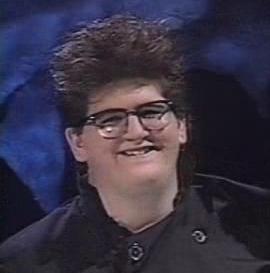 Dr. F's first assistant, who didn't get much characterization at all, since he was only around for one season. He pretty much aped Dr. F's tendencies towards loving evil and played the part of the sniveling aide. 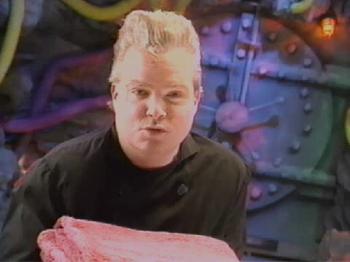 Dr. Erhardt's replacement after Season 1, TV's Frank was, in the end, far more fleshed out than his predecessor. More laid back, goofy, and ineffectual than even Dr. F himself, Frank often found himself the butt of jokes, or just plain dead. He departed the show at the end of Season 6, where he was assumed into Second Banana Heaven — and left because there was too much backstabbing and jealousy.note Gabby Hayes in particular had it out for him. 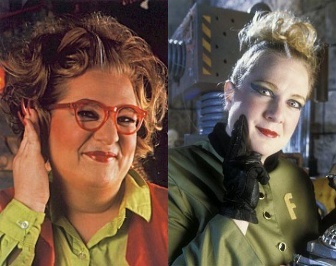 Dr. F's beloved mother, who showed up a few times in Season 6, but became Dr. F's foil in Season 7 when she moves back in. Starting Season 8, after Trace Beaulieu leaves the show, she becomes the head scientist showing the movies. The story is that after Clayton died (again, it's a bit complicated), she was put in cryogenic freezing, thawed by the future apes, and became the Lawgiver. Doesn't make much sense, but you know how it is. 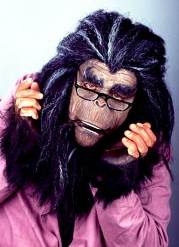 An evolved gorilla from the year 2525, from a future where apes evolved from men?. Yes, it's a madhouse. He's heard it all. First appearing in the beginning of Season 8, he's a professor of anthropology, but soon becomes little more than The Ditz often foiling Pearl's machinations. 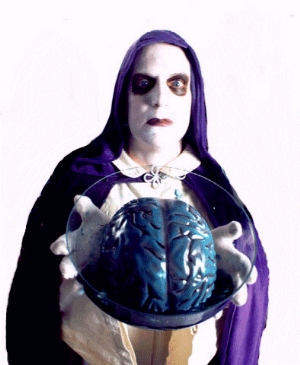 A member of an allegedly advanced species, the Observers. He and his kind first appear in Season 8 to observe the experiment, but Mike ends up blowing up their planet, leaving only the one behind to hang around with Pearl and Bobo. Allegedly, his species is just the brain, which his "host body" carries around in a salad bowl, but this show being what it is, the concept is only tangentially ever alluded to, and you may as well assume the guy in pale face with the robe is "Brain Guy". 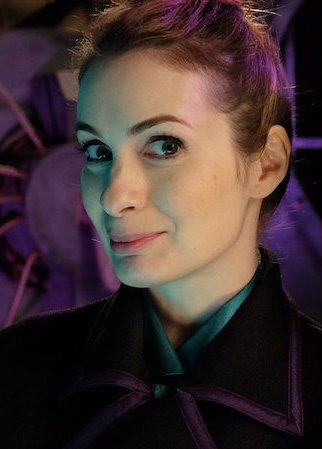 The daughter of Dr. Clayton Forrester. She's following the footsteps of her father and grandmother in sending the most terrible movies possible to Jonah and the Bots. 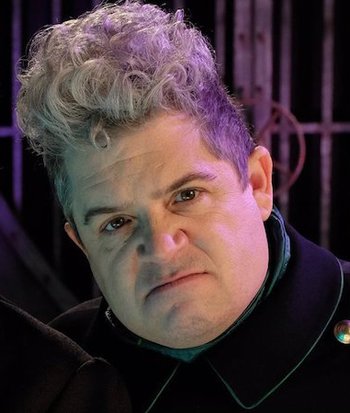 The son of TV's Frank. Like his father, he assists Kinga in torturing Jonah and the Bots with low-grade movies, as well as button-pushing.

The Mads' Other Minions 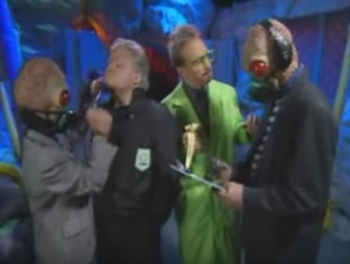 Played by: reportedly, some unpaid interns

Two mole people who served as Forrester's minions in early seasons. Apart from doing occasional menial work, it's implied that they work the cameras in Deep 13. 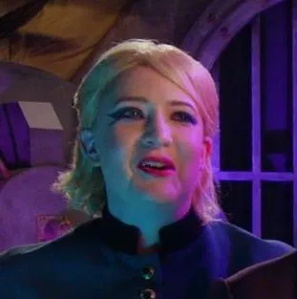 A clone of Pearl Forrester, graciously donated so the real Pearl wouldn't need to visit her granddaughter. 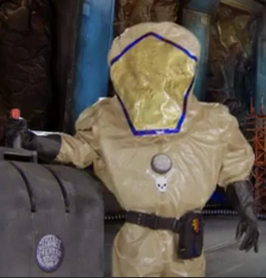 The guy in the hazmat suit who sends the movies up. He also manages the movie storage tanks in the even-lower basements of Moon 14.

The Skeleton Crew / The Boneheads 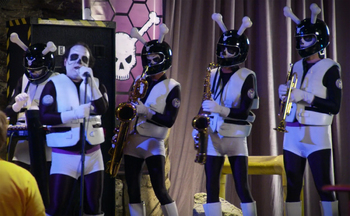 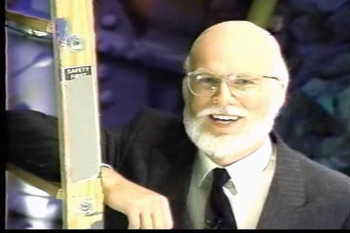 Host of TV's Biography, on A&E, invited down to Deep 13 by Dr. Forrester and subsequently tied up, tortured, and genetically modified. He would later go on to host the opening and closing bumpers for The Mystery Science Theater Hour, and was a recurring guest at Deep 13's annual Turkey Day festivities. 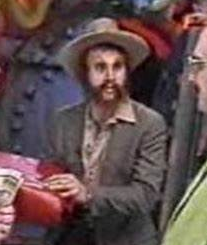 Appearing in Manos: The Hands of Fate, the so-called "satyr" Torgo is a frequent visitor of Deep 13. Recognized for his tattered clothing, big knees, and shaky grasp of speech. 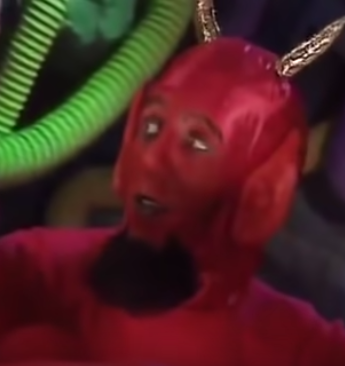 Central villain of Santa Claus, frequent dinner guest of the Forresters, doll merchant, and hoary mangoat of the netherworld. 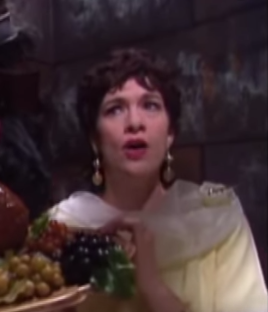 The snide Roman noblewoman who serves as the Mads' captor, host, and then captor again after the wormhole deposits everyone in Roman times. 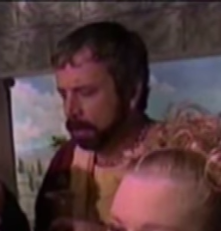