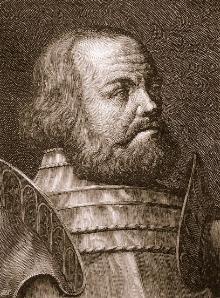 The German Imperial Knight and Mercenary Götz of the Iron Hand.
Advertisement:

Gottfried "Götz" von Berlichingen (c. 1480 – 23 July 1562), sometimes recorded Berlingen and also known as Götz of the Iron Hand, was a German Imperial Knight (Reichsritter), and mercenary. He was born around 1480 at Berlichingen in Württemberg to a noble family and earned his reputation by fighting in a number of wars over an impressive 47 year career. At the age of 24 he lost his right hand to cannonfire and wore a metal prosthetic for the rest of his life, which became his calling card.

He is perhaps best remembered for the vulgar expression "Er kann mich im Arsche lecken!"note literally "He can lick my arse!", which would inspire the phrase "Kiss my ass!", attributed to him by Johann Wolfgang von Goethe in a play based on his life (sort of). Götz's name is now used as a euphemism for the expression.

While some Berserk fans believe that he was the inspiration for the protagonist — who has the similar-sounding name of Guts, and is a mercenary who also has a mechanical hand — author Kentaro Miura claims that he never knew about Berlinchingen when he started work on his long-running manga, opting to pick the name "Guts" because it sounded like a German name.