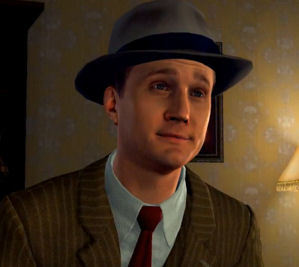 "Ralph, friends who want to stay friends don't discuss religion or politics. In my case, you can add the war to that."

Our protagonist. A 27 year old Marine turned cop, born from a wealthy San Francisco family. Cole distinguished himself in the Pacific theatre, earning the Silver Star for his conduct. After the war, he moved to Los Angeles with his family, joining the LAPD. He quickly rises through the ranks, becoming something of a "golden boy", a visually pleasing, talented face that the public can admire.

"I tell ya, I'm jinxed—I always get landed with this crap."

"I've heard all about you, Phelps. You go easy on me and let me earn the odd citation, then maybe we'll get along."

"Rusty's Razor: You blame the guy that's banging her."

"Everyone has their vices. Even you, Phelps."

A detective working in LAPD's Vice Desk, and Cole's fourth partner. Knows all there is to know about the shady businesses the Jewish Mafia conducts in Los Angeles, and is openly racist towards the city's black and Hispanic populations.

"Go soak your head, Phelps. This hero business is a full-time obsession with you."

An old and bitter detective working in LAPD's Arson Desk, and Cole's fifth partner. A veteran of World War I and a long standing member of the police, Biggs has seen just about all there is to see, and has a cynical outlook on his work as well as life in general.

"God's mill may grind slowly, but it grinds finely, son!"

Captain of the Homicide Desk. Responsible for promoting Cole to detective.

Captain of the Traffic Desk. Cole starts out as a detective under his watch.

Lieutenant of the Vice Desk and Earle's former partner.

Captain of the Arson Desk. Has a low tolerance for failure and a low opinion of Cole.

Chief forensics expert for the LAPD. Mal is one of Cole's most useful and trusted allies throughout the course of the game, providing him with forensic evidence and autopsy reports crucial to solving his investigations. The most recurrent character in the game next to Cole himself, since he's present at pretty much every crime scene in the game, and he's most certainly earned his place amongst the fandom.

An investigator with Technical Services. He mainly shows up to help Cole handle evidence safely.

The police chief of LAPD.

A Marine who served under Cole's command in World War II as a sergeant. Currently works for California Fire & Life as an insurance investigator and later for the DA's office as a special investigator.

A German nightclub singer and junkie that Cole forms an attachment with.

A former Navy Corpsman attached to Cole's unit in Okinawa. He is now a medical student at the University of Southern California under the tutelage of Doctor Fontaine.

A psychotherapist with an unusual method for treating mental disorders.

A former Marine who was once part of another platoon in Cole's battalion on Okinawa.

Notable Figures in the Patrol Cases

The first suspect to be both arrested, interrogated and proven positively guilty by Phelps personally (while still being a beat cop, no less). He was the store owner of Hartfield's Jewellery, Jewish, and had quite a temper problem. Initially, he is accused of shooting and killing Everett Gage, another store owner.

Notable Figures in the Traffic Cases

A fading B-Movie actress Cole runs into after she and her niece drive off a cliff and into a billboard.

A powerful mobster based in Las Vegas and June Ballard's husband, who gets involved (albeit indirectly) in the later stages of The Fallen Idol.

Notable Figures in the Homicide Cases

The perpetrator of the Black Dahlia murder, and believed to still be targeting women in LA.

A Real Life Jewish mobster that Cole encounters during his time in Ad Vice.

Notable Figures in the Arson Cases

A rich and influential real estate tycoon, Monroe is the head of Elysian Fields Developments, a land development firm that has become very prominent in Los Angeles.

Vice-President of California Fire & Life, the insurance company that Jack Kelso works for.