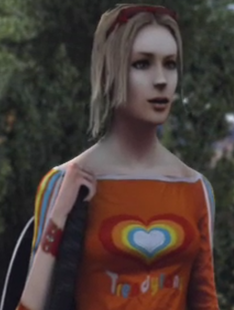 A student at Leafmore High, Shannon Matthews stays after school after her brother Kenny goes missing, as it is the first place to look for clues and she suspects (correctly) that that is where he went missing. Canonically, she survives the experience.

In the second game, Shannon has become a student at Fallcreek University, and has taken on a much darker personality. Of the first game's survivors, she is the only one who's been able to adapt to the mortifilia infection, which has driven a wedge between her and Kenny, who needs pills to suppress the infection. She survives the game, helping her boyfriend Stan kill her brother Kenny at the end. 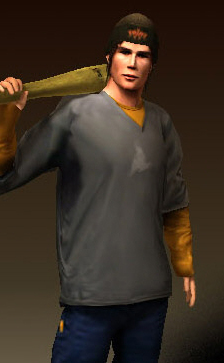 A student at Leafmore High, Stan Jones is a layabout slacker who is failing his classes. While he puts on a Pretty Fly for a White Guy attitude, he's otherwise fairly mellow, and is friends with Kenny. He gets dragged into the events of the game when the main gang stumble upon him hacking into his school records and offering to do the same for them. Canonically, he survives the experience.

After the first game, Stan dropped out of school and spent some time in jail, and by the second game he's a pizza delivery boy. He needs to take medication to suppress the mortifilia infection. He survives the game, helping his girlfriend Shannon kill Kenny at the end. 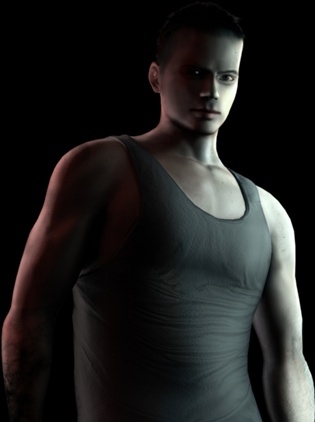 A student at Leafmore High, Kenny Matthews is a player on the school's basketball team. One day after practice, he is kidnapped by Principal Herbert Friedman to use as a test subject for experiments with the mortifilia plant, later to be rescued by his sister Shannon, his girlfriend Ashley, and his friends Stan and Josh. Canonically, he survives the experience.

In the second game, Kenny has become a student at Fallcreek University. He needs medication to suppress the mortifilia infection, which drives a wedge between him and his sister Shannon, who has learned to suppress the infection without medication and frequently urges him to do the same. After running out of medicine, Kenny mutates into a giant monster, and proceeds to kill Mei and Corey, as well as kidnap, rape, and impregnate Amy. He is put down by Shannon and Stan in the finale. 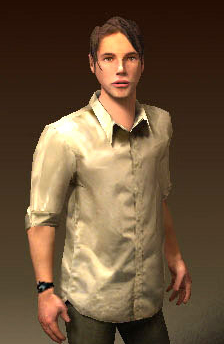 A student at Leafmore High, Josh Carter is a school newspaper reporter who offers to help Shannon and Ashley search the school for evidence of Kenny's location after hours. Canonically, he survives the experience. Afterwards, he and Ashley returned to the ruins of Leafmore High, where they were attacked and presumably killed by Jedidiah.

A student at Leafmore High, Ashley Thompson is a cheerleader who is dating Kenny Matthews. After Kenny goes missing, Ashley is initially annoyed, but begins to worry for his safety after Shannon tells her that she hasn't seen him either, and so she helps to search for him at school after hours. Canonically, she survives the experience. Afterwards, she and Josh returned to the ruins of Leafmore High, where they were attacked and presumably killed by Jedediah. 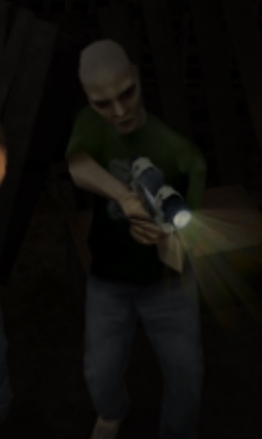 A student at Leafmore High, Dan was kidnapped by Principal Friedman before the events of the game. He offers to help Kenny escape from Friedman's clutches, but is killed in the process.

The principal of Leafmore High, Herbert Friedman is also kidnapping and carrying out grotesque experiments on his students. He and his brother Leonard went on an expedition to Africa to discover the secret to immortality, and discovered the mortifilia plant, which seemed to have such properties. While the plant worked on Herbert and his wife, Elisabeth Lucy Wickson, it had disastrous effects on Leonard, turning him into a monster. Distraught, Herbert founded Leafmore High as a cover for his experiments and to have a steady stream of test subjects, hoping to find a way to save Leonard. At the end of the game, he is killed by Mr. Walden, who had gone crazy due to his mortifilia infection.

Herbert Friedman's brother. He and Herbert discovered the mortifilia plant while on an expedition to Africa to find the secret to immortality, and while it worked on Herbert and his wife, it turned Leonard into a monster. He now lives in the school's basement, having grown into a giant Plant Person whose roots stretch across the campus. He is killed at the end of the game by the protagonists, serving as the Final Boss. The second game reveals that he was Not Quite Dead, using his son Jedidiah to take care of him and spread the mortifilia plant around Fallcreek University. Both of them are killed at the end.

A biology teacher at Leafmore High, Denny Walden learned about Friedman's experiments, and attempted to investigate for himself. He escaped, but got himself infected and accidentally released the mutated test subjects onto the campus. He tries to help the main characters, but slowly goes insane from the infection, eventually killing Friedman in an attempt to get the cure. He is then killed by Leonard.

The nurse at Leafmore High, Elisabeth Lucy Wickson is also Leonard Friedman's wife. Like Herbert, she was granted immortality by the mortifilia plant. At mid-game, Mr. Walden, who begin to show symptoms of the infection, came to ask about something to fight it, but didn't get any response by the nurse; so he desperately beat her, trying to get information about the cure. She did told him about the cure, but he had hurt her critically..

A student at Fallcreek University, Corey Wilde is a daredevil skater whose first and second love are his girlfriend Mei Wang and his muscle car. Corey and Mei try to sneak into a Delta Theta Gamma party just as it was being overrun by mortifilia monsters, and they must fight their way out and try to survive and stop the outbreak. At the end of the game, with his car trashed, Mei dead, and infection coursing through him, Corey is Driven to Suicide by Kenny.

Chainsaw Good: Somewhat subverted as the chainsaw is mostly a tool in the game. But he makes use of it in a chainsaw duel with Jebediah worthy of Texas Chainsaw Massacre. Hence the above image.

A student at Fallcreek University, Mei Wang is a computer whiz and gamer who is dating Corey Wilde and whose roommate is her beloved sister Jun. While Mei and Corey are sneaking into a Delta Theta Gamma party, it is overrun by mortifilia monsters, and they must fight their way out and try to survive and stop the outbreak. She is killed by Kenny, who crushes her head beneath his foot in front of Corey. 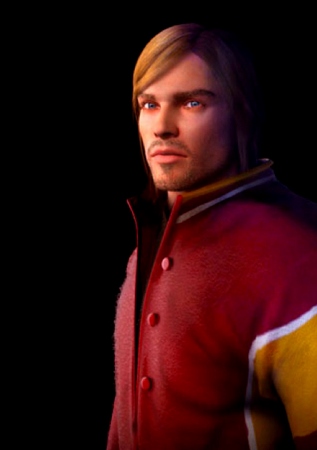 A student at Fallcreek University, Sven Hansen is a Norwegian exchange student who plays on the school hockey team and dates Amy Brookes. He and Amy were at the Delta Theta Gamma party when people started mutating, and had to fight their way out. He is killed by Jedidiah and hanged on a meat hook. 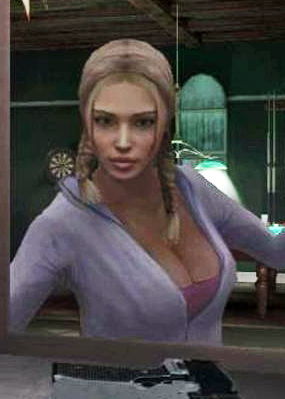 A student at Fallcreek University, Amy Brookes is a bubbly, yet intelligent, girl who is dating Sven Hansen. The two of them were at the Delta Theta Gamma party when people started mutating, and had to fight their way out. She is kidnapped, raped, and impregnated by Kenny, and is later captured by Delta Theta Gamma, who seek to study her mutant offspring. She gives birth to a monster, which destroys the helicopter she was in and presumably kills everyone on board. 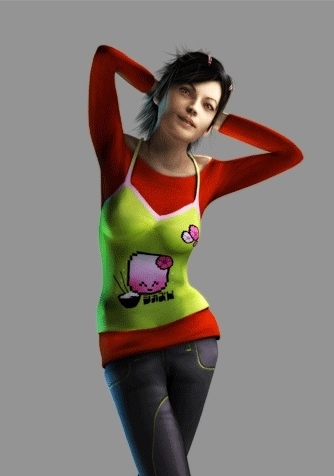 A student at Fallcreek University, Jun Wang is Mei's sister and roommate. She helps get Sven and Amy into the Delta Theta Gamma party, and is later trapped in her dorm when monsters attack. Despite Sven and Mei's best efforts, the monsters succeed in getting to Jun.

A professor of biology at Fallcreek University, Richard James assists the students in their quest to end the outbreak, supplying them with upgrades to their batteries and healing items. He also works for Delta Theta Gamma, and helps them kidnap the survivors after Leonard and Jedidiah are defeated. He is presumably killed when Amy gives birth, her mutant offspring destroying the helicopter they were in.

Jedidiah is a mad, mentally damaged man who lives in an empty, decaying mansion in the woods, occasionally venturing out to kidnap and murder people. He is Leonard Friedman's son, and serves to care for his father and spread the mortifilia plant around the Fallcreek campus. The two of them are killed at the end of the game.

Delta Theta Gamma is a fraternity operating on the campus of Fallcreek University. The mortifilia outbreak started at a party they were holding. They're basically your typical hard-partying Delta House wannabes. At least, on the surface. Beneath their frat-boy exterior is actually a powerful secret society hundreds of years old, with members highly placed in the US government.