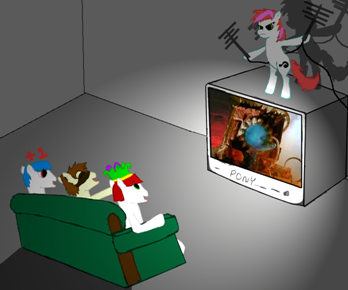 Art by Feral_Socks
Several of the Livestream hosts watching Actium Maximus: War of the Alien Dinosaurs.
(Pictured left to right: Roboshi, DeeperMadness, Harlequin_Jester, and Flicker)
"We talk and mock the movies that we stream for you, ya bunch of crazy people."

An event held by the community of Ponibooru where, on Friday nights, the site would host a movie showing via Livestream with several active members of the community serving as commentators, who cracked jokes the whole way through. Sadly, the movie night seemingly died along with the site when Eco, the site owner, reached a Creator Breakdown. Some time after this though, a new Livestream was created for Derpibooru, the site which the booru community had migrated to, to continue yet another series of satirical movie nights, now recognized by Equestria Daily.

Regular commentators include Harlequin_Jester, Feral_Socks, daisyhead, Roboshi, Psychopomf, Starly, and formerly MaroonBunyip. Occasionally they will bring in a guest host for a month to help comment on the films. When the movie's over, or when the presentation falls flat, the team will do readings of bad fan fiction. Fair warning, at this point expect the stream to get very NSFW due to the subject of said fanfics. Currently, they're working their way through My Immortal.

The presentations are held at 7:30 P.M EST with the films showed are announced beforehand both on Equestria Daily's "Nightly Roundup" and on posters uploaded to the site drawn by the Livestream team themselves. Film Night has obtained it's own dedicated channel here

, with a few of the older ones here

The livestream also has a characters page.

Tropes presented and invoked by the Ponibooru Movie Night