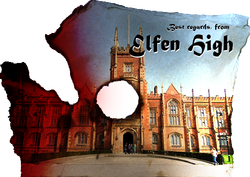 A few billion years ago, the Universe was created. Don't ask how, nobody knows, though people tend to agree this was a bad move.

On an insignificant little blue planet in the Milky Way, creatures evolved. First came the bacteria, then came the amphibians, then the reptiles, then the birds, then the mammals and then the Indian narrator who probably got quite a few things wrong in this sentence. But what also evolved were vampires, demons, werewolves, fairies, Gods, etc.

First were the Egyptian Gods, and shortly after them were the Hindu Gods. They got along affably enough, and ruled the Earth together. Then came the Greeks, Aesir, Aztecs, Shinto and Abrahamics, along others. They lived under the rule of the Hindus and Egyptians, who kept the Earth from being destroyed by their constant warring.

Then the True Fae revealed themselves. Nobody was quite sure where they came from- another planet? Another dimension? Another galaxy? But they showed their intents to take over Earth, and Earth allied to defeat them. The Egyptian Gods were completely destroyed in this struggle. After centuries of warfare, the True Fae were chased away.

In the aftermath of the battle, all the Pantheons and supernatural beings were severely weakened. The supernatural council got together, got wasted, debated on whether the rumors of Loki screwing Aphrodite were true, and then they ultimately made the decision to leave Earth, due to the fact they were too weak at the moment, and those dirty hairless apes living there were getting stronger and more advanced every day.

So with some exceptions, supernatural creatures left Earth for the Celestial planes or their own universes. But nowadays the supernatural is wondering why the hell they left, and are considering returning to Earth. And some humans, aware of the supernatural, are also aware that they might want to return. They're also aware some places on Earth are more magical than others.

This is where the friggin title of the rp, Elfen High, comes into play. Somewhere in Britain, there is a highly magical hotspot. A few decades ago, a boarding school was built over it. As a defense, many teachers here aren't what they appear, and are usually trained mages. The school has even become a place where highly intelligent, or students with high magical potential, can be protected.

But magical creatures, though they officially aren't supposed to go to Earth, they often make visits here because they love the sheer magic of it. They often came here.

And then on December 21st, 2012, a horde of rogue demons entered London and started slaughtering. They were stopped by one Mr. Crowley, the Headmaster of Elfen High, intent on protecting his home.

But the Masquerade, so carefully maintained before, was shattered for good. Humans now knew about supernatural beings, even if the knowledge so far is slim. Elfen High upgraded from a mere school to a training facility where countries send children with magical powers.

Which is to say, Elfen High 2 is the long-awaited reboot (though not sequel, as the title would suggest) to the original Elfen High, bringing back tweaked versions of the original cast, as well as many new characters. Warning, the RP is Trope Overdosed as hell, perhaps even more than the original. Continue at your own risk.

As of Arc 2, the RP has a new spin-off - Roads Untraveled, which chronicles the adventures of a documentary crew as they attempt to document the daily life at the ISSR, the U.N. military base in Hell. Ties to the original are tenuous, plot-wise, but some characters from the proper RP make their way there.

This rp provides examples of: