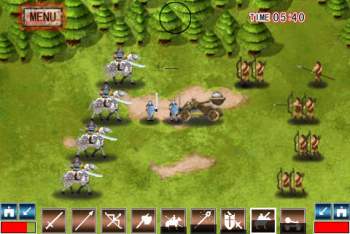 Age of War is a Real-Time Strategy game for IOS and PC, made by Roc Software and released in 2010. It takes place in a rather generic fantasy world, where seven factions are driven to war over the limited land and resources. There are the generic fantasy Humans, the nomadic Huns, High Elves, Dark Elves, Uruk-hai – like Desert Orcs, Warhammer – inspired mountain orcs and the Undead. You’re restricted to the regular humans, high elves and desert orcs initially, with other factions unlocked once you go far enough into the game.

The game uses a Risk - style map, where you can attack any of the adjacent territories. Once your made your move, you’re transported to the battle map, where you need to destroy the opponent’s stronghold by sending troops from your own fortress while the enemy tries to do the same. At the beginning you’re restricted to swordsmen and archers, but can buy better units as the game goes on. Both you and the opponent also possess a Charge Meter, which allows you to instantly create a wave of any unlocked unit for free. The entire game for IOS can be downloaded here