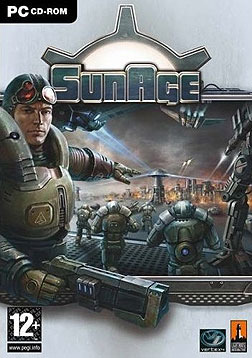 Sun Age: Battle For Elysium is a Real-Time Strategy game developed by Austrian company Vertex 4 and published by Lighthouse Interactive. It is unique among other RTS games in that despite being released in 2007, it uses 2D sprites and an isometric view, akin to RTS games from the 90s to the early 2000s. It does keep up to date with it's beautiful graphics and features found in modern RTS games.
Advertisement:

The game takes place in a ravaged future, where constant warfare between nations have destroyed much of the world's surface, turning it into a polluted inhospitable wasteland. The remnants of the nations are forced to live in isolated havens known as Domes and struggled to survive on whatever resources they could stockpile. One by one, the Domes fell, until only one Dome remains - the Federal Dome, and ultimately what's left of humanity. They are now struggling to fight for their survival as their very existence is being threatened by the barbaric and fanatical Raak-Zun, a race of mutants evolved from humans who were left to die in the outside world and certainly held a grudge for that. Not that the Raak-Zun aren't without their own problems...

A prophecy speaks of an individual, the Heretic, who would lead a rebellion against the Raak-Zun tribes, resulting in an all-out war between the splintered tribes. In the midst of this chaos, the Heretic would ascend to become the physical embodiment of their god, Raak. The Heretic has already began planning the rebellion, having found a teleportation device to the mysterious tropical planet Elysium and having build his own army there. Said planet is also home to a race of sentient machines known as the Sentinel, created by an unknown Master Race. It is unknown what their purpose is on Elysium, but their hostile nature would spell trouble for the Federation and the Raak-Zun, especially when they start invading Earth.