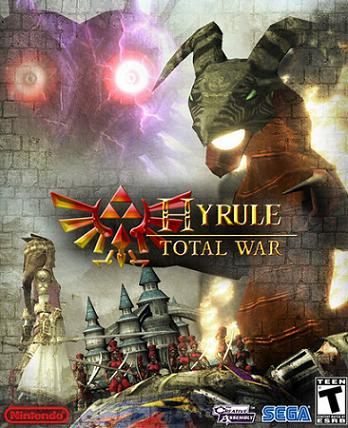 Hyrule Conquest (formerly known as Hyrule: Total War), is a fan total overhaul mod for the free Real-Time Strategy game 0 A.D. based on the The Legend of Zelda series. Created by modder UndyingNephalim, it allows players to take command of many iconic characters and races from the series in a real-time strategy format.

Formerly a mod for Medieval II: Total War started in 2011, the game was ported to 0 A.D.'s Pyrogenesis engine in 2017, due to the former's engine limitations, with regular updates adding in more characters and playable factions. Sweetening the deal in the porting is that, while Medieval II costs $19.99 on Steam, 0 AD is 100% free, meaning more people will have access to the mod, and is also 100% open-source, meaning the creator has free rein to make the game however he wants.

The mod can be downloaded from ModDB here.

Although the "official" development in Medieval II has ceased, an unofficial version is still being maintained and regularly updated, which can be downloaded here

Not to be confused with Hyrule Warriors.