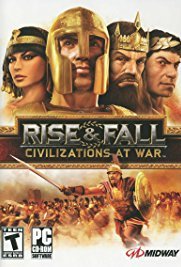 "Civilizations may rise and fall, but heroes never die."
— Official ad motto
Rise and Fall: Civilizations At War is a RTS game produced by (now defunct) Stainless Steel Studios and Midway Games. You have the choice of playing four different factions, each having their own strengths and weaknesses. The following civilizations are Ancient Persia, Ancient Egypt, Ancient Greece and Ancient Rome. Each of these factions have two specialized "historical" Heroes, but the player can only pick one to play as.

Rise and Fall: Civilizations At War contains the following tropes: