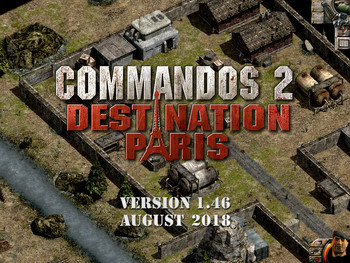 Commandos 2: Destination Paris is a Game Mod based on Commandos 2: Men of Courage. The first version dates back to 2004, and it is still regularly updated.

Originally, it only added extra difficulty to Men of Courage, but it has since expanded to include all of the missions from the original Commandos games, Behind Enemy Lines, Beyond the Call of Duty and Destination Berlin. The latter's gameplay was heavily criticized for being nowhere near as practical as that of Men of Courage, and this mod fixes this. A huge number of original missions were added, bringing the total of missions to 245 as of 2018.