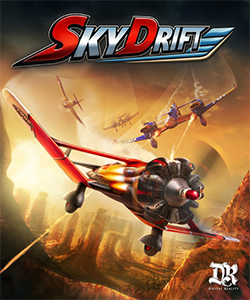 SkyDrift is an airborne Vehicular Combat racing game developed by Digital Reality. It was self-published by them for the PC (November 21, 2011) and PlayStation 3 (September 6, 2011) while Namco Bandai Partners handled the Xbox 360 release. (September 7, 2011)

There isn't a plot to speak of, but that isn't really an issue here. The premise is a brutal, over-the-top series of races involving a variety of colorful, fast, and very well-armed aircraft, pretty-looking environments and lots of Power Ups. Improbable Piloting Skills are a must. There are no achivements for second place.

The game consists of a single-player tournament and various online options, with quick, player and custom matches available. The tournament has a linear series of stages, where completing a certain number of events in a stage will unlock the next one, though you need not finish them all (though doing so unlocks new liveries for the planes) Game modes include: