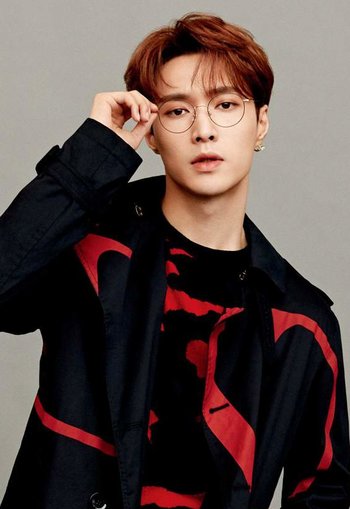 Zhang Yixing (Chinese: 张艺兴; born October 7, 1991), also known professionally as Lay Zhang or simply Lay (Korean: 레이, also stylized LAY), is a singer-songwriter, record producer, dancer, actor, and member of Korean-Chinese boy band EXO and its Chinese sub-group EXO-M. He began his career as a child star in 2005, when he rose to fame as the third-place winner of Star Academy, a TV show based in his hometown of Hunan, China. In 2008, 16-year-old Zhang auditioned for SM Entertainment at the company's global casting auditions held in Changsha. Shortly after, Zhang moved to South Korea for his idol training upon passing the auditions.

In October 2016, he released his first solo EP, Lose Control, in both China and South Korea, peaking at number one on the Gaon Album Chart as well as number four on Billboard's US World Albums chart, and made him the first Chinese artist to enter the iTunes Top 60. The EP contains tracks that Zhang personally wrote by himself, which later became the standard in his releases. He has also written songs for EXO and several Chinese television programs.

The release of his second album NAMANANA marked Zhang's foray into the US music market, with the album containing 22 songs, 11 of which are in Chinese language with English counterparts for each. The album debuted at 21 on Billboard 200, making him the highest ranked Mandopop artist on the chart. The album also ranked 1st on the World Albums and Independent Albums charts.

He's not just any musician, though. In September 2015, he released his autobiography, Standing Firm at 24, which broke several online book records and making him take the fourth place on 'The 10th Chinese Celebrity Writers List', becoming the youngest celebrity author to enter the charts. In July 2016, Zhang was appointed by the Communist Youth League of China (CYLC) of Changsha as a publicity ambassador, the first celebrity to hold such title. In September 2017, he came in at the 20th spot on the 2017 Forbes China Celebrity 100 List with estimated earnings of 120 million yuan; he came in the 11th spot in 2019. Zhang is a brand ambassador of over 30 brands, including Converse, MAC Cosmetics, Chaumet Paris, Ray-Ban, Milka Chocolate, H&M, Perrier, Calvin Klein, Valentino, Huawei Nova (2015-2018), and Samsung (2018-2019).

Tropes relating to his works with EXO can be found on that page.

Lay also has his golden advice for the trainees in "Idol Producer": BALANCE.