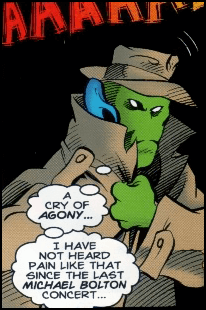 "I feel really sorry for James Blunt. Because every morning, he has to wake up and think 'Oh my God, I'm James Blunt.'"
— Bill Bailey
Advertisement:

Music is a dog-eat-dog business, and when these dogs bite, they bite hard.

For the band of the same name starring Robbie Williams and Gary Barlow, see Take That.

Referring to Mr B being the brain behind the infamous "Eat my goal" phenomenon and subsequent song "Mr B's World Cup Anthem" in which he blasts the corporate nature of football and suggests we should celebrate when the footballers are out of the country, making him seem something of a hypocrite though the intent may have been an apology.

Pop
Advertisement:
Punk/New Wave
Rock
Others
To be sorted

I've got a whole bunch of
Press releases, smiles, and evening gowns
To hide the fact that my
Songs are Tori Amos hand-me-downs.
To make me seem as if I
Understand that music's from the soul,
To make me feel as if I'm
Not a product, carefully controlled.

And perhaps most telling, at least about Smith's view of Spears:

Try not to think about the
Truer, deeper, better singer-
Songwriters you've never heard of
Working hard and starving while I
Tour the country, do the talk shows,
Sell the albums, get on M.T.V.,
I only hope that someday
Someone hears the songs I wrote for me....