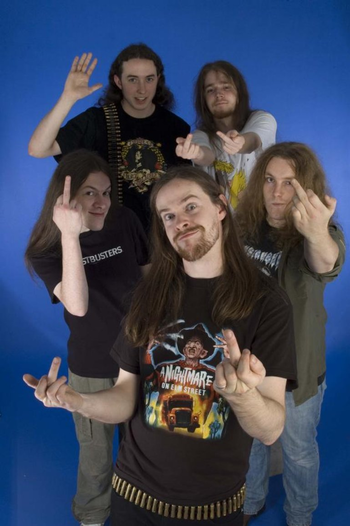 Four thrashers and a waver.
Advertisement:

Gama Bomb is a Thrash Metal band hailing from Newry, Ireland; founded in 2002 by vocalist Philly Byrne, bassist Joe McGuigan and former guitarist Luke Graham. They started off with releasing their first demo The Survival Option and single The Fatal Mission in 2002 and 2003 respectively. After being signed to Witches Brew, they released their first album, Survival of the Fastest, in 2005 before joining Earache in 2007 alongside Evile, Municipal Waste, Bonded By Blood and many others as a part of the second wave of Thrash Metal. With Earache came 2008's Citizen Brain and 2009's Tales From The Grave In Space, before leaving the label for AFM Records. They released The Terror Tapes in late April/early May of 2013. Their 5th full-length album, Untouchable Glory released in October 30, 2015.