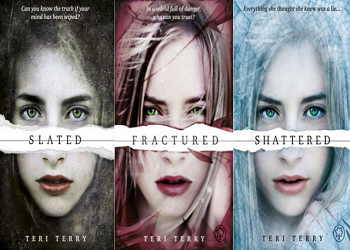 "No. I remember. So long as I don't think about it too much, my hands and feet take over; some memory locked into muscle that my brain has nothing to do with. I know how to drive. And I'm better at it than he is."
Advertisement:

Slated is the first book in a Young Adult series written by Teri Terry.

Kyla's memory has been erased, her personality wiped blank, her memories lost forever.

The government claims she was a terrorist, and that they are giving her a second chance - as long as she plays by their rules. But echoes of the past whisper in Kyla's mind. Someone is lying to her, and nothing is as it seems. Who can she trust in her search for the truth?

The sequels are Fractured and Shattered.