Literature / The Most Beautiful Moment In Life: The Notes

WARNING: This book series deals with some heavy themes and violent content that might be triggering, including mental illness, suicide, self harm and abuse, and does so more explicitly than other entries in the BTS Universe. It also contains Late Arrival Spoilers for the series - it is highly recommended to at least read SAVE ME before reading this page. You Have Been Warned. 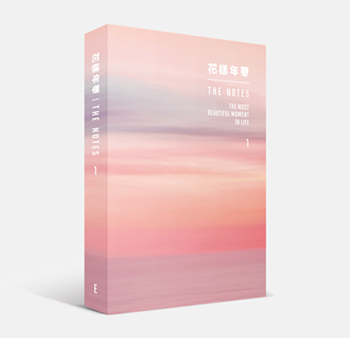 The cover of the official English version.

花樣年華 THE NOTES, also known as The Most Beautiful Moment in Life: The Notes, is a book series that forms part of the BTS Universe, the multi-media story that started in the music videos of Korean group BTS.

This book series tells the story of a group of seven boys growing up through the years, their friendship in an oppressive school, their separation, and one of the boys' quest to save his friends from tragedy. It follows the format of diary-like entries, with the point of view alternating between the seven characters.

Some of the Notes were originally released as part of booklets contained in physical copies of the LOVE YOURSELF album series. The book series compiles them along with new ones, greatly expanding on the characters and the story. Along with the webtoon SAVE ME, it serves as the universe's Mind Screwdriver, but in a way that makes both complementary to each other, being additional pieces to the larger puzzle that is the BU.

The first volume of the series, THE NOTES 1, was released in March of 2019, and it's available in Korean, English, Japanese, and Spanish in the Weply app. In February 2020, a second volume was announced, scheduled for this year.

The Notes provides examples of: