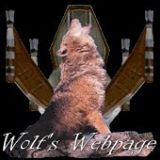 Of these are my favorite things! Wolves and Military Grade Hardware!
Advertisement:

Darkflamewolf is a prolific fan game designer and aspiring writer/author who has created a variety of missions/campaigns/games for commercial video games such as Duke Nukem 3D, Descent, and Big Kahuna Reef alongside fanmade content and custom games for Zelda Classic, RPG Maker, and Game Maker.

They started off as a young player wanting to create their own games since they first received Duke Nukem 3D from a friend in middle school. Once they found out it had a level editor, the spark of creativity was lit and it has not gone out yet. Since then, they acquired and learned to master the Descent Mission Builder that came with special editions of Descent; They went on to create several campaigns throughout the years for the game series. They also dabbled in RPG Maker territory, creating two games and currently working on a third which appears to be in Development Hell, even to the point of Vapor Ware. They've also created a sizeable collection of Zelda Classic quests, some of which are quite popular within that community. Interestingly, They've dove into Big Kahuna Reef and created multiple level packs totaling over 250 challenging levels. Finally, they've finished and released a fan made Mega Man game, Megaman: Revenge of the Fallen, on Nov 27, 2014.

They have added writing to their list of skills with their own stories and have completed two full novel-sized fanfics for both the The Legend of Zelda series and the movie Zootopia entitled Zelda's Honor and In Darkness I Hide respectively. They have two other fanfics which are in hiatus, one for Final Fantasy VIII and one for Zootopia. They are now advertising a six book series revolving around one of their personal flagship furry characters: Taylor Renee and her tailmaw, Ahya, in a series entitled The Legend of Ahya with the first book, Target of Interest, having released on July 8, 2021 under the pen name of Matthew Colvath.

They've also directed a OC Remix album for the soundtrack of Skies of Arcadia with a total of 36 tracks across 3 CD s entitled Arcadia Legends. On February 7, 2017, the album was granted official OC Remix album status and on December 11, 2018 the release trailer was dropped: Arcadia Legends Release Trailer

. The entire album was released on December 21, 2018 and can be downloaded for free at: http://arcadia.ocremix.org!

One last noteworthy thing about this album was that after physical copies were made, a box of 75 was sent to SEGA and a copy managed to make it into the hands of Reiko Kodama, Producer of Skies of Arcadia - a milestone for OC Remix albums. They've also wrapped up directing a second OC Remix album for Jet Force Gemini entitled Mizar Attacks! that was granted official album status on the site on February 16, 2020 and was officially released to the public for free on June 22, 2021. You can download this album at: https://mizar.ocremix.org!

channel which details 100% walkthroughs of their works alongside various Let's Plays of commercial games. Given the name and that they are involved in the furry fandom, Darkflamewolf also has quite an impressive collection of art revolving around their fursona and other characters they've created, all of which will be appearing in their The Legend of Ahya book series. - You can find them at these locations: Fur Affinity

Tropes that could apply to Darkflamewolf or their works: