Fanfic / In Darkness I Hide 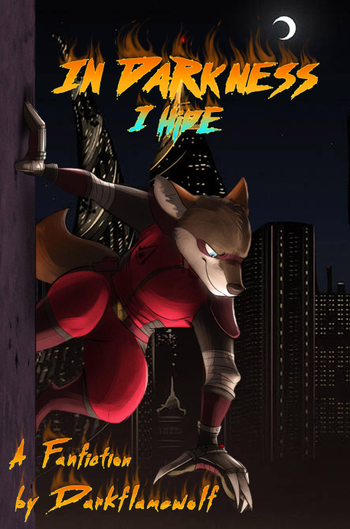 That pose requires some serious upper body and core strength!
In Darkness I Hide is a fanfic that deviates from the norm in the Zootopia fandom. Instead of focusing on Judy Hopps and Nick Wilde as the primary protagonists, the fanfic chooses to following an entirely brand-new creation: a female wolf named Murana Delante Wolford. What sets this fanfic apart from most other Original Character fanfics is that the main protagonist does not share the limelight with the film's canon characters, instead the film cast plays more of a supporting role and services the plot of the Original Character.

The story is set in Zootopia and follows a literal week long journey through the life of Murana Wolford. She is an influential bank CEO by day and a murderous vigilante by night that burns her victims alive. What seems fairly black and white as a protagonist slowly becomes convoluted and complex as more characters are added to the mix, each adding more insight to the nature of Murana and helps to explain the true motivations for her actions.

This fanfic is very adult-oriented in nature. Although not as severe as Dark Flame Wolf's previous finished fanfic, Zelda's Honor, this story does deal with a lot of dark and mature themes. There are instances of past abuse, neglect, torture, and how such experiences can color a person's life in the present in the form of Post Traumatic Stress Disorder, among other things. There is also sufficient violence and a quite a few allusions to sexual actions peppered throughout the story as well.

This is Dark Flame Wolf's third fanfic written, but second finished and can be viewed at fanfiction.net