Characters / In Darkness I Hide

A list of the canon, and original characters in In Darkness I Hide.

There are some unmarked spoilers on this page, so proceed with caution or read the story first! 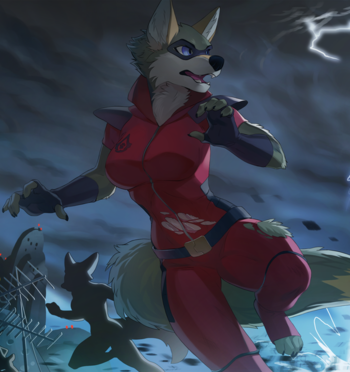 Murana Delante Wolford in her vigilante alias: Dark Flame Wolf.
Our timber wolf heroine of this entire story. She is a reputable bank CEO by day for Lemming Brothers Bank and a cold-hearted vigilante that goes by the name of Dark Flame Wolf at night.

His role just got expanded.
The husband to Murana Wolford and a ZPD cop that has just received a promotion.
Max Thrash 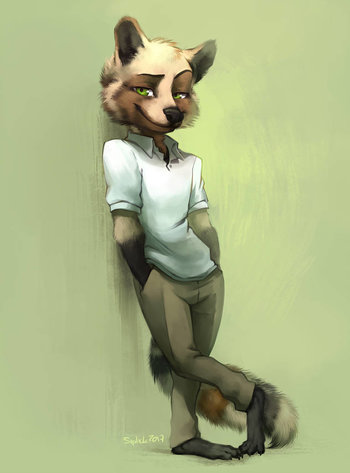 Max Thrash, looking suave and without a care in the world.
An orphan raccoon residing in Tail Hollow orphanage located in Happytown. He is a unique child with a specific condition that makes it hard for him to relate to others. As a result, he is bullied incessantly. However, he has many hidden talents just waiting to emerge.
Steven Stinkman 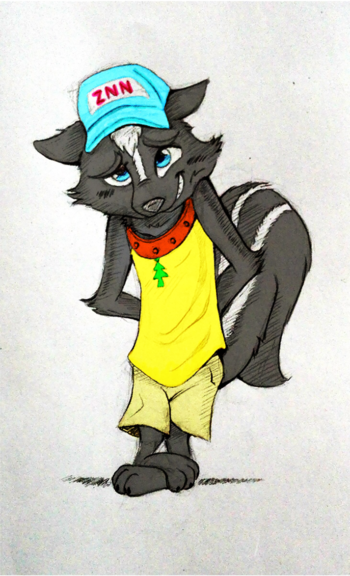 Steven Stinkman, looking all shy and cute.
The adopted skunk son of Murana Delante Wolford. He was rescued when he was much younger and brought into her family early on. He now works as a reporter at ZNN. 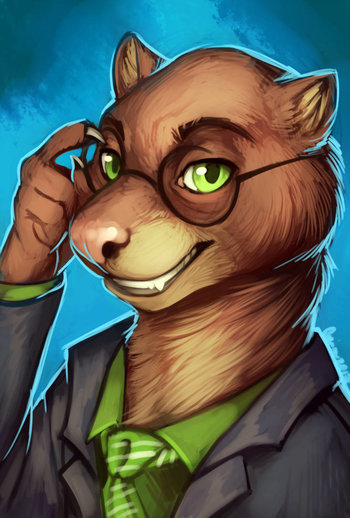 Ronald Latrinae, in his best pressed suit and glasses.
A mysterious figure that shows up suddenly one day to request the job for being CEO secretary for Lemming Brothers Bank. He has a lot of knowledge about a wide variety of topics and seems to excel at everything he puts his mind to.
Trudy

The former secretary of Murana Wolford. She is fired when it was discovered that she was embezzling a lot of money from the bank. She later returns to seek revenge on being fired. 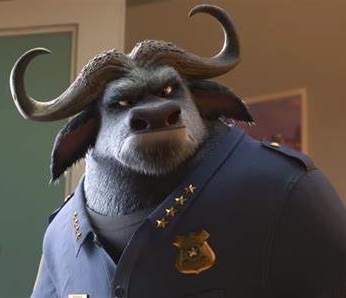 Bogo is not happy about vigilantes!
The chief of Precinct 1 of the ZPD. He takes his job seriously and has made it his personal mission to bring down criminals who take the law into their own hands. He can be very protective of his officers while simultaneously chewing them out.
Judy Hopps 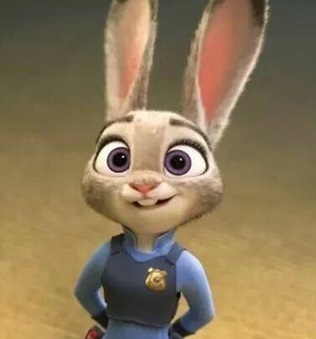 Ready to make the world a better place!
The famed bunny cop of the ZPD. She is heralded as the most prestigious cop in her class, graduating as valedictorian and cementing her status as a fine officer by solving the missing mammals case involving Night Howlers.
Nick Wilde 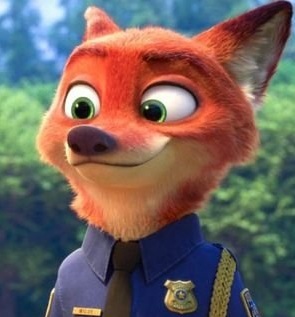 Zootopia's favorite fox cop!
The former hustler of pawpsicles on the streets, he was inducted into the Night Howler case by Judy Hopps and eventually grew to respect her as an individual. She prompted his decision to become a cop himself and rise above the station of his species.
Ralph Grayz

A Wildebeest cop newly assigned to the Zootopia Precinct 1 ZPD. He has a strong sense of justice and is eager to get out on the streets and prove his worth. He is accompanied by his wife, Stella and his son, Rodney. 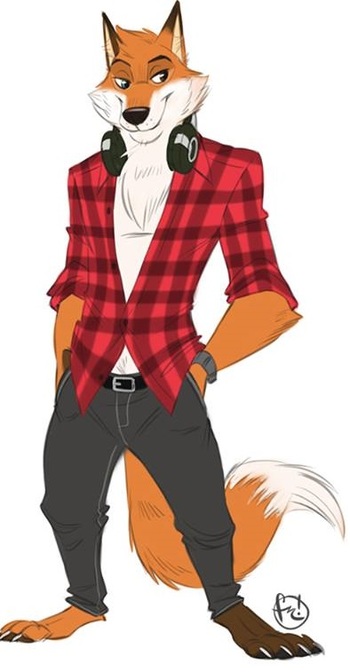 A very suave fox DJ, hitting up all the ladies.
A former fox lover of Murana Wolford. He was a huge part of her youth growing up in Zootopia. He now runs a small night club in central downtown called The Fox Den which fronts as a cover for other operations. Has a disdain for cops.
Billy Silva 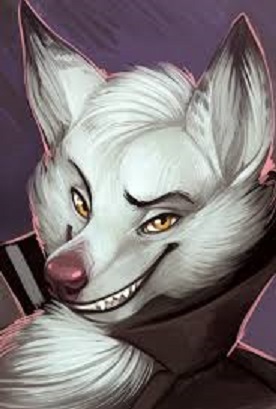 Crafty fox with a boatload of black market weapons.
An associate of Murana Wolford. He currently resides under The Fox Den run by AJ. He is the current weapons supplier for her moonlighting activities. He is a very mysterious silver fox who values the privacy of his clients.
Christopher Guara 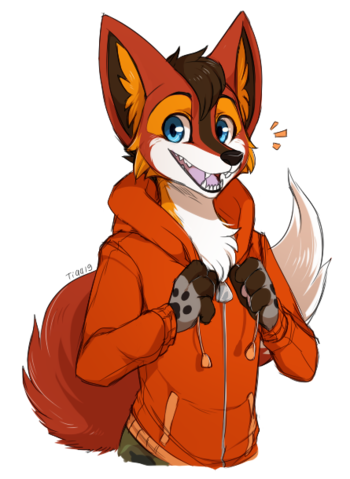 A happy, little vigilante who looks suspiciously like a fox.
A fellow ZNN colleague of Steven Stinkman's. He has known the skunk for quite some time and seems to lead a secret double life.
Courtney

A skunk that Steven Stinkman meets in a local coffee shop that has taken quite a liking to him and his family.

The diminutive mongoose neighbor to Murana Wolford. A very raunchy girl who has had some steamy encounters with a wide variety of mammals in and around Murana's apartment. 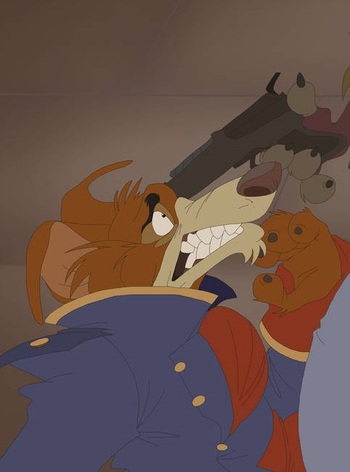 Don Karnage, not looking so smug right now.
The infamous pirate of the skies from the classic series, TaleSpin. He shows up suddenly in Zootopia, decades past his supposed prime and life span to kidnap children for unknown purposes. He seems to have a checkered past with Murana Delante Wolford.
Dumptruck 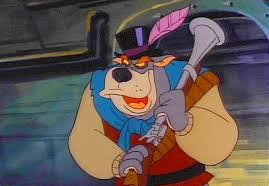 A very unsavory pirate that doesn't like orcas.
The dumb bulldog muscle for Don Karnage. He isn't very bright, but he is very lethal and has a strange perversion for young cubs.
Jack Savage

Jack Savage, as deadly efficient as ever.
A very suave and dangerous assassin from Murana Delante Wolford’s past. He is deadly efficient and has been tasked with the job of killing her. However, his actions are unusual and it seems he may have other motives.
Mad Dog 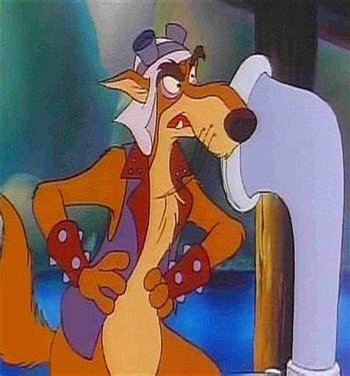 A pirate with a grudge and an image to prove.
The sniveling right-hand canine to Don Karnage. He is always looking to get in his captain's good graces and hates anyone who tries to usurp his position.
Rosco

A mysterious figure that seems to be the mastermind behind the shadowy assassins that have been sent after Murana Wolford.