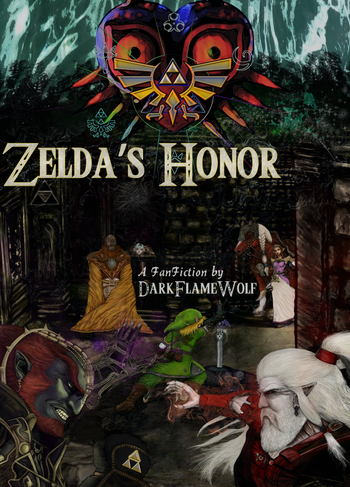 So many unanswered questions just from the cover alone.
Zelda's Honor is a fanfic dealing with the potential Plot Hole events that could have happened between The Legend of Zelda: Ocarina of Time and The Legend of Zelda: Twilight Princess. The story picks up about six months after the events of The Legend of Zelda: Majora's Mask and depicts how life has changed for Link, Zelda and Malon since the imprisonment of Ganondorf because of Link's knowledge of the future. This one single act of prohibiting Ganondorf of acquiring the Triforce sets the stage for a new villain, Naar, to arise in the south from the country of Nevachrea.
Advertisement:

What starts off as a simple invasion of Hyrule turns into a brutal, grim battle for survival which force Link and his friends to retreat to the land of their former enemies to join forces to combat this new, unnatural menace. When they finally unveil the secret behind the Nevachrean's supernatural powers, an even darker threat emerges which seeks to revive an even more ancient, timeless foe. Only with the help of his companions and his own fighting prowess will Link defeat this foe, claim the Master Sword and hopefully use the Triforce to rid Hyrule of these abominations.

The fanfic is very adult-oriented in nature and not just because it has graphic lemon scenes (which can be mighty delectable for those interested in that). It also has extreme scenes of violence, gore and some gut wrenching chapters of torture and/or rape. Seeing past the initial shock of these actual acts of brutality, each extreme action is actually used to further the plot and/or plot devices that come into play later in the story. Although not discussed in depth, the fanfic does give credence to the discussion and thought on the horrors of war and the effect it has on those who experience or participate in it and deals with a lot of mature themes that most young readers may not be comfortable in addressing.

This is Dark Flame Wolf's first fanfic ever written and can be viewed at fanfiction.net