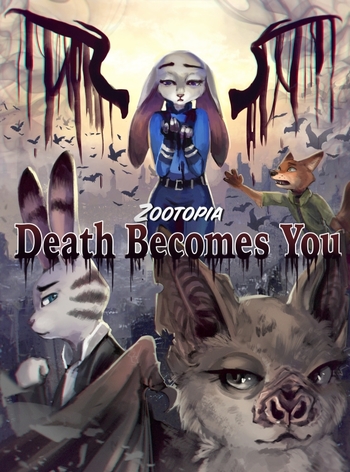 Interspecies Romance at its grimmest.

is a fanfic that takes place over a year after the events of the movie. Judy and Nick are now detectives in the ZPD (Zootopia Police Department) and are slowly taking the next step in their relationship by traveling to Judy's home at the Burrows to meet her parents. Amidst the rocky start to a potential budding romance, a new scourge has come to Zootopia in the form of new city immigrants. Crime shoots up and a great conspiracy is revealed that could shake the very foundations of everything Judy Hopps believes in.

A running trend with all Darkflamewolf's fanfics, this is also an adult-oriented story complete with graphic lemon scenes and excessively descriptive action/violence/gore. The story is presented with a dual timeline similar to the film Memento, where the story is presented achronologically. It addresses topics such as interspecies (read: interracial) relationships, ideological immigrant fanaticism, government corruption and carries on Zootopia's theme of prejudice.