Video Game / Descent: The Enemy Within 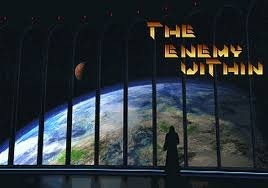 What sets this mission set apart from most others released on the net for the game is tri-fold: 1) It houses 26 main levels with 6 secret levels giving it a whopping total of 32 levels to play through, bigger than the official game the mod is based on. 2) It has a completely new robot cast that replaces almost every Descent 2 robot, including six new boss robots. 3) A brand new soundtrack was made for all 26 levels by Alter-Fox.