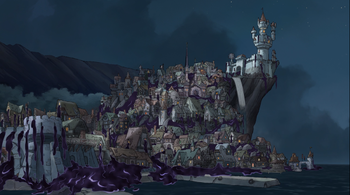 "I have nothing left to lose."
"Summon the army! This kingdom is under the attack of a ruthless enemy that will stop at nothing: my wife!"
—Zog

Immediately following the last episode's shocking events, Elfo is dead. However, Bean had just used the Elixir of Life in hopes of reviving either her fallen friend, or her late mother Dagmar. Bean ultimately chooses her mother, causing Dagmar to turn back into flesh after years of being petrified as a stone statue. The entire kingdom happily receives Dagmar back as their rightful queen and throw a party to them, but they forget about their current queen, Oona, who is angered by Dagmar's presence and everyone's — including her husband's — preference towards her.

Bean tells the story about what happened to Elfo to Dagmar who says that they'll throw a fitting funeral for him. In the following day, a grieving court goes to Elfo's funeral, including Tess, who returns Luci the crystal ball given to her by Elfo, but they forget to bring Oona together, causing tensions between her and Dagmar to rise to the point where they start a physical struggle that causes Elfo's body to be thrown into the ocean and Bean to turn against Oona.

A meeting on the court ensues, where Zog must decide one queen to keep with him. While he is in love with Dagmar and she is loved, Odval argues that Oona is an important part of an already flimsy alliance with Dankmire, outside, Oona overhears Pendergast say that she has outlived her usefulness and swears against it.

In the night, Dagmar and Zog are drinking before she ditches him to spend time with Bean, with Luci being kicked out as well. Zog and Luci get separated when Zog goes after Oona and Luci finds a strange statue of Pendergast. In the following morning, Dagmar ditches Zog again to go riding with Bean.

Zog tells Luci the story of how he met Dagmar: he was a warrior that was never trained to be a prince, he assumed because his older brother, Yog, was killed by poisoned wine. Zog didn't want to rule, so he kept competing, eventually falling in love with Dagmar, the daughter of a noble from a far off land. They married and had a happy life, until Dagmar drank the poisoned wine.

Bean and her mother bond over several shared traits, including a taste for drinking and partying. While they party, Odval and Oona have a secret meeting, with him trying to protect her while Oona, furious, swear to make all of them pay for her anger, which Bunty overhears and swears to tell to Bean. Bean and her mother get even closer and when they come back to the castle, Bean finds Bunty turned to stone, she runs scared to find even more people, including Sorcerio, turned to stone.

Bean, Odval and Zog reunite, believing that Oona is behind it, they decide to act against her, despite Odval's advice. Zog sends Derek to a tower to protect him from his upcoming fight with Oona. Odval and Bean come back to say they can't find Oona and the group resources to the crystal ball.

The ball tells them that Oona is still in Dreamland and that "The danger is near", but Bean is zapped by the ball. Dagmar says she will protect Bean while Zog and Odval hunt Oona. Dagmar takes Bean to a secret library, while Luci figures out that the ball has the power to show holograms of things that happened in the room, including things from much long ago.

In the secret library, Dagmar starts spouting some cryptic and vague lines related about Bean's true nature. Luci finds and drags Zog back to the crystal ball room, showing him what really happened 15 years ago: Dagmar was victim of her own poisoning plot, she tried to turn Zog into stone by poisoning his wine with a potion, though Bean switched the glasses accidentally. Luci then reveals the secret library to Zog.

Dagmar says that Zog tried to change Bean, while she wants Bean "as she was born to be". While Bean is looking off into the night, Dagmar takes a flask of "Infernal Amplifier" and encounters Zog on the stairs. Zog tries to patch things up, but Dagmar says that something much bigger than them is going on, and is related to an ongoing war and the destiny of Bean. She pushes him downstairs, she then mixes the potion with another liquid and releases a huge wave of dark purple liquid on the kingdom. Zog and Luci are able to narrowly avoid the liquid, but Odval, the troops, and the kingdom are hit by the liquid and turned into stone. Dagmar quickly comes back to Bean and says they have to run away together. On another part of the castle, Luci bemoans that he should be the bad guy, but is attacked by an unknown assailant offscreen and bottled up again.

Dagmar pushes Bean in the ocean and jumps right after her, falling into the water, the two women swim for a ship of an unknown nation, with a group of unknown strange creatures as crew. They set sail for the "homeland".

Back in the castle, Zog bemoans to have nothing left to lose, having lost his family and his kingdom. His crown quickly falls from his head into the sea.