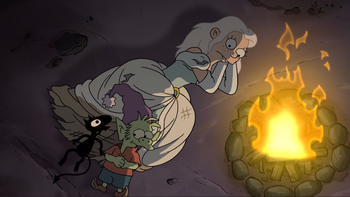 "What is this feeling that I don't want to drink away?" "That's hope."

Disenchantment might take place in a Crapsack World, but it makes the genuine friendship built between three unlikely and flawed protagonists even more sweet.

"A Princess, an Elf, and a Demon Walk Into a Bar"
"The Princess of Darkness"
"Faster, Princess! Kill! Kill!"
"Love's Tender Rampage"