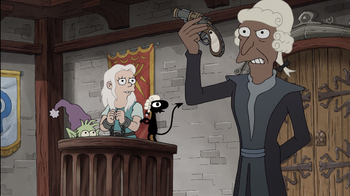 This is a 900 year old witch!
"No you idiot, everything is not alright!"
— Odval, to the Herald

Tiabeanie stands accused of murdering Zog (though he still lives). Odval pushes for the quickest possible execution of her in order to take over the kingdom as Derek's guardian.

After the accidental shooting at the end of the previous episode, Odval has Bean arrested for attempting to murder her father. Luci and Elfo offer their help to get Bean out of trouble, while Sorcerio ineptly tries to heal Zog's injury. Odval then confabulates with the Arch-Druidess, showing that he has manipulated the situation so he would become the regent in case the king died, allowing him to turn Derek into their puppet king while the Archdruidess manipulates the opinion of the people to put them against Bean.

Odval attempts to torture Bean in order to make her falsely confess to being a witch without having to go through a trial, but she resists, and Elfo and Luci interrupt by claiming to be Bean's lawyers. Odval and the Arch-Druidess manipulate Derek so he will end up condemning Bean to death. Derek tries to ask his father for counsel about how to make justice, with Zog saying that sometimes the right decision is not always the one everyone likes.

The trial begins, and things don't look good as her actions in previous episodes are presented by Odval in the worst of lights to paint her as a witch. At the end of the trial, Derek has Bean, Elfo and Luci sent to the dungeons. While waiting, Bean manages to listen in on a meeting of the secret society, with Odval mentioning that Derek might be willing to acquit Bean, and Sorcerio suggests that they should take Zog out of the way. Stan the executioner comes in then, and frees the trio because he is sure his wife Bunty could not be wrong about Bean, letting them into the catacombs.

Rather than run away, Bean returns to the castle to get the bullet out of Zog's stomach. She manages to extract it, but Derek arrives right as she finishes the operation, and he immediately pronounces Bean guilty. The trio is tied at a stake to be burned alive, and Bean thanks Elfo and Luci for being with her all this time. Luci reveals he lost his immortality when he got them out of Hell, so he's going to die with them as well. Before the flames reach them, though, a hole in the ground swallows them, and they fall into an underground dungeon full of pale elves - led by Dagmar.