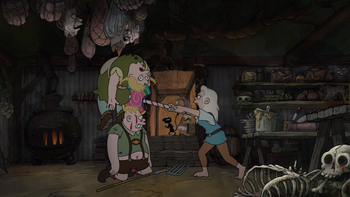 Fed up with Bean after her wild house party gone horribly wrong, Zog sends Bean to a convent to work as a nun. Predictably, she neither fits in nor is able to do anything properly. The nuns eventually kick her out back to the castle.

Zog, angered and fed up, kicks Bean out of the castle, forcing her to get a job before he will even consider letting her return home. Bean manages to find Bunty's house and move in with her while looking for a job to do, to prove her independency, while Elfo is happy being treated as a baby by Bunty. After failing in a plethora of different jobs, Stan, Bunty's husband, invites her to work with him since he lost his apprentice. He turns out to be an executioner and torturer for the kingdom, and Bean's indecisiveness is able to torture a prisoner enough that Stan finds her a natural. A cackling witch is brought down to the dungeon, accused to be guilty of various missing people in the woods and will be executed.

Bunty still treats Elfo as a little baby, but he starts getting fed up with it when Bunty takes things too far.

Bean tries bonding with the witch, seeing a bit of herself on the old woman. Stan throws out his back and is unable to kill Gwen, so Bean is promoted to executioner and has to be the one to execute the witch. Elfo runs away from Bunty, finally fed up with being treated as a baby and goes to the Enchanted Forest alone. Bean can't bring herself to execute Gwen both due to being extremely nervous and believing there might be more to the witch than just being a cackling Wicked Witch. She is ridiculed by her entire kingdom and decides she may not be suited to live in a city. She leaves Dreamland with Luci and they find out they're on Elfo's trail on the forest.

Meanwhile, Elfo is on the forest and finds a gingerbread house with two siblings in it: Hansel and Gretel, who seem to be up to something sinister and want to eat him. When he falls asleep, they put him on the oven to roast. Bean and Luci get to the house and are offered some food by Hansel and Gretel. Bean quickly realizes what is going on after eating and runs to save Elfo, starting to fight against Hansel and Gretel while Luci saves Elfo.

Bean gets a candy axe, and hunts down Hansel and Gretel through the gingerbread house full of traps. She finally gets to the basement full of human remains of their previous victims. They reveal that they are cannibalistic serial killers, and that they cursed the Witch, who was just an innocent old lady who took them in. Bean quickly kills them, which Luci praises her for. The curse on the Witch is quickly broken.

Gwen the Witch is freed from the curse and absolved of her false charges, she goes off to find her sister that was in the house. Zog awards himself a medal for outstanding parenting to Bean's success. Bean hugs her father who says he is proud of her and threatens to rip his spinal chord if he mentions her buck teeth again, to which he proudly says "That's my girl".