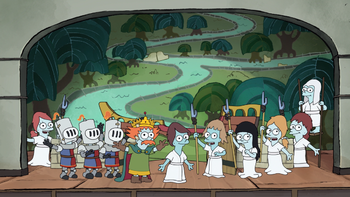 "All hail Dankmire!"
"Just once could we go on a family vacation without having to run away screaming?"
—Luci

Bean misses a royal event that she was meant to take part on and comes home drunk again, where she told Elfo and Luci about a party she could never go to. She has a fight with Zog ans says that she needs a role to play in the castle, and he has the idea of making her an Amabassador in their visit to Dankmire, Oona's homeland.

When they got there, Bean shows a surprising amount of skill on dealing with her ambassadorial duties, being able to be polite and cover her father's rudeness. The royal family is taken to a long children's play about the origins of the Canal and the war between Dankmire and Dreamland. Impressed with her skill, Zog assigns her to give a speech during the banquet that night. Bean goes with Luci and Elfo to a restaurant to write her speech, but Luci gets her drunk by slipping shots in her soda.

Bean shows up drunk out of her mind to the banquet, making a scene and embarrassing herself. Zog tries to assign the speech to Derek, who is half Dankmirian, but he is unable to do it and Bean takes over, making an even worse scene, even flashing the Dankmirians and greatly offending the Dankmirian court, who chases the Dreamland Royal Family out. While trying to escape, Oona gets separated from the rest of the family when their boat breaks and is able to get to Dreamland safely, while the others run to the swamps, where the Dankmirians believe that they'll be killed by the Swamp Monster.

Off in the swamps, Derek and Zog are kidnapped by hillbillies while Bean is distracted stopping a fight between Elfo and Luci. The hillbillies attempt to fry Derek and Zog alive to make them food for the Swamp Monster. Bean gets there to save them, but is knocked out quickly. They're then tied up and offered to the monster, but Bean is able to use her ambassadorial skills to befriend the hillbillies and keeps them around enough for them to be eaten by the Swamp Monster. bean manages to get herself free and defeat the monster alone, saving her family and friends.

While they leave the swamp, Elfo and Luci make up, while Zog proudly praises Bean's skills. Zog allows Bean to go to the party she was never allowed while Zog and Derek go home. Derek mentions to still be freaked out about the giant skillet.