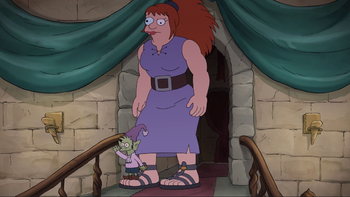 "Brace yourselves for the inevitable visualization."
"We're all about peace and love and goddamn body positivity!"
—Tess, about the giants.

After a night of partying, Bean, Elfo and Luci pass out on the street, and in the morning are mistaken for plague victims and are thrown in the plague pit, and it's set on fire. While Bean monologues about how she and her friends never tried some things, Elfo assumes that she is hitting on him and tries to kiss her, which she turns down, explaining that when she mentioned bliss, she wanted to say a new type of drug. Luci then rescues the group by showing a way out with a rope ladder.

As Bean tries to defuse the situation and go to a den for Bliss users, Elfo says he has a girlfriend. While in the den, the Bliss takes a while to kick in, meanwhile, Luci and Bean want to hear more of Elfo's girl, who tries to stick to that lie, describing a very tall not-elf girl, with normal teeth, one green eye and red hair. She is described as living far away, and had met Elfo on a family vacation, but all her family are dead.

When the Bliss kicks in, Bean hallucinates meeting Elfo's girlfriend. Swearing that it's real, she sends Pendergast and some knights to find the so-called girlfriend, so Elfo can have a date during the Royal Ball.

Later, the knights come back, bringing with them a giantess that fits into Elfo's description. He goes along with it to keep the lie and says she is his girlfriend. Bean convinces her father to let her live in the cheese cave below the castle and Bean locks Elfo and the giantess together. Despite his attempts to defuse the situation, the giantess attacks him.

Meanwhile, Luci meets a saddened and still pig-turned Merkimer, who can't get with any girl, since he lost his looks, power and riches. Luci agrees to help him at the cost of letting him ride Merkimer as a horse every now and then. They try the crystal ball, but Merkimer is quickly rejected by it.

In the following day, Bean takes Pendergast, the giantess and Elfo to a date. She is interested in knowing more about them, at which point Giantess sneezes out Turbish's horse. With her throat clean, the giantess named Tess reveals herself to be a grad student and can talk. She and Elfo get away and he convinces her to stick to the lie if he gets her a magic eye that she can see through again.

Luci advises Merkimer to act pathetic, but it does not work. He then helps Elfo to find something for Tess to use as an eye, and Elfo ends up stealing the crystal ball. Bean gets Tess all ready for the party and the group goes to the ball together.

Pendergast fails to hit on Bean, while the crystal ball finally works as an eye, but it gives Tess True Sight instead, allowing her to see the truth about everything. She says she'll reveal a truth about Elfo, but he goes first and tells Bean about the truth that he isn't dating Tess. However, she says that isn't the truth she was going to say. Figuring out that everyone is scared of her and only thinks of her as a monster, she rages against them. Turbish comes back and fires a flaming arrow on the party, and while trying to put out, Tess causes it to become even bigger and is forced to run away from the angry mob that had formed, with Bean's assistance.

They run until becoming trapped, but they get rid of the mob by releasing a bunch of Bliss on them, which causes them to get high and forget about Tess. Tess goes away, picking up Merkimer to leave with her, but she throws him back to Dreamland after he proves himself to be annoying.

Elfo and Bean talk, surrounded by Bliss mist and kiss each other, but are so high they can't decide whether it actually happened.