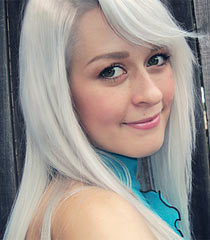 Sarah Lee Ann Wiedenheft (born July 3, 1993; occasionally shortened to Sarah Weed) is an American voice actress of Danish descent born in Amersfoort, the Netherlands. Wiedenheft is known for her work on Japanese anime series and films associated with Funimation. She has provided voices for a number of English dubs of anime films and television series.