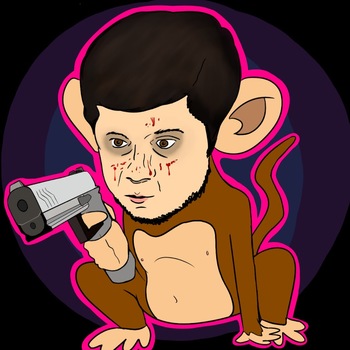 The man, the myth, the autist in a piece of fanart he didn't like. note  Technically he did like it, he was just disturbed by the art. If he did hate it, he would have never let it see the light of day. This was just funnier.

Mumkey Jones is a reviewer of such classic anime as B Gata H Kei and Naruto who is known for his tendency to go past the boundaries of what's considered acceptable. The channel is presented as a satirical comedy about the life of the depressed maniac Mumkey Jones as he brings up topics of his life such as autism, Elliot Rodger, molestation, and dealing with getting rejected by women like Jane Goodall.

Mumkey's YouTube accounts have all been terminated, so find his videos here.

open/close all folders
General
Mumkey's Anime Reviews
Mumkashi Chronicles: Village of Autism
Thot: "His Chakura levels are so much bigger than yours. Like, his Chakra levels are at least 3 inches longer than yours. And it's so THICK. God, his chakura is so girthy compared to you. Oh, anyway, bye."
Mumkey: ...Then I'll transorm back and we can double team her!
Killer B: Shee', I haven't double teamed a black chick since ninja college.
Killer B: According to my Gay-dar, he is 2 kilometers away.
Mumkey: Uh... Don't you mean your Beyakugon?
Killer B: Yeah, Beyakugon. What did you think I said?

The Jumkey Retribution Arc
Munkey Jones Stops a School Shooting
Mumkey vs. TV Tropes
Unsorted/Other Stuff
The Leader: Mumkey
The Lance: Ass Burger (Formerly Digi Bro)
The "Smart One": Erich/Ebitch/Ecuck More like the sheeple of the group am I righ guys
The Strong One: Rusty Cage
The Chick: SheepOver