Film / On The Silver Globe 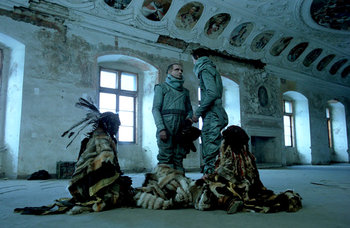 You can think only if you believe.
"So the days pass, and I ask myself whether one is not hypnotized as a child by a silver globe, by life, and whether this is living."
— Virginia Woolf

On the Silver Globe (Polish: Na srebrnym globie) is a Polish film premiered in 1988 (after a 10 year delay due to Communism-bourne fears of subversive content via a vice-minister of culture), directed by Andrzej Żuławski (Who also directed Possession). The film is based on parts of a trilogy of novels called The Lunar Trilogy (Polish: Trylogia Księżycowa), written by the director’s great-uncle Jerzy Żuławski, an early-20th-century writer and thinker.

The opaque, if not labyrinthine plot starts out regarding a group of astronauts (two men and a woman) who leave Earth to find freedom. Their spaceship crashes on an unnamed Earth-like planet (Implied to possibly be The Dark Side of the Moon, though this is left ambiguous especially as the surface looks nothing like the real-life Moon).

The astronauts are equipped with video-recorders and so most of the film is presented as FoundFootage (and may indeed be a very notable early example of the technique in modern cinema). This is addressed in the plot in several points where the black square-like recorders are transferred from one of the main characters to a supporting one, with one astronaut at one point wondering if anyone will ever see the footage so meticulously recorded.

After some naval-gazing about freedom and the nature of existence in general, the trio reach a seashore where they find the atmosphere more tolerable. They decide to start a new civilization, free of the traditional chains and bonds of society. Thus over time they end up building a village.

After many many years, only one member of the crew, Jerzy, is still alive to watch the growth of a new society, with a religion based on mythical tales about the expedition from Earth. The first off-Earth generation calls him The Old Man, treating him as a demi-God. The Old Man eventually leaves them and before his death, sends his video diary back to Earth in a rocket, stored at a remote burial site where one of the other astronaut's preserved corpse (inside their spacesuit) lies on a pile of rocks.

The rocket reaches Earth where a space researcher named Marek (Andrzej Seweryn) receives the video diary and soon travels to the planet. On arrival, he is welcomed by the cast of priests as The Messiah, who can release them from the captivity of the Szerns (sometimes spelled Sherns or Cherns, depending on translation), indigenous crow-like occupants of the planet. Shortly afterwards, Marek organizes an army and enters the city of the Szerns. Meanwhile, the priests start to believe that Marek was an outcast from the Earth, rather than a messiah who came to fulfill the religious prophecy.

Unfortunately, about 20% of the film was left unfilmed, largely because of the above vice-minister's executive meddling. These parts were patched with stock footage and voice-over descriptions of the missing scenes. One such clip being the oddly hypnotic still-cam footage of Polish people riding down an escalator in what may be either an airport or subway.

The OTHER notable thing (besides the running time which reaches nearly 3 hours) is the philosophical dialogue that suffers (or improves) by a translation into English. Suffers for losing some of the accuracy or subtleties of the director's commentary, and improves for the esoteric and greater-scope of big-question debates that the characters ruminate over. The movie in itself is still largely coherent.