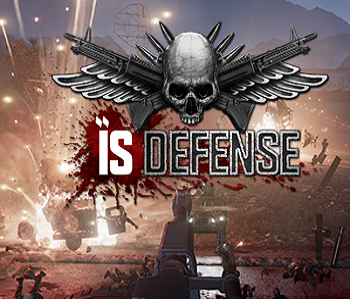 IS Defense is a game developed by the Polish studio Destructive Creations (best known for their debut game Hatred) and released on April 19th, 2016 on PC through Steam. It is set in an alternate 2020, where the Islamic State has taken over the entire Middle East and North Africa region, and began sending boats full of terrorists en-masse in order to overwhelm Europe.

You play as a lone NATO guard, stuck in his turret and tasked with repelling the invasion. You shoot at the boats and other attackers with a machine gun and a rocket launcher. These can be upgraded through earning skill points, and you also receive extra support through killstreaks, which can be upgraded themselves. There are three levels: Sicilian Shores, Spanish Harbor and Croatian Mainland, which are considered completed once you manage to kill a requisite number of terrorists and destroy enough of their vehicles.

Tropes present in IS Defense: