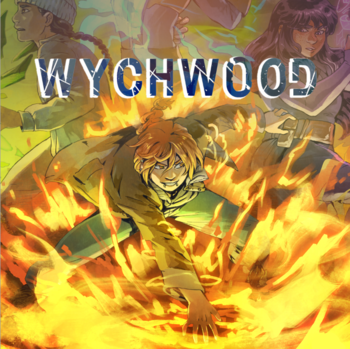 A fiery gal, her concerned friend, the boss's niece and a dangerous bio-weapon become friends?
Advertisement:

Wychwood is a sci-fantasy webcomic about rebuilding after the end of the world. It's rated for teens and up and updates twice a week

Over twenty years after the world was invaded and then rescued from a terrifying alien force, humanity has begun to master the strange magic their enemy left behind. After spearheading the wartime research efforts, an organization called Wychwood has become the leading authority on magic and is aggressively hunting for new things to study.

This is kind of a bad thing for Tiara, a delinquent who has been using a mysterious power to goof around for years without realizing the kind of attention it could attract.