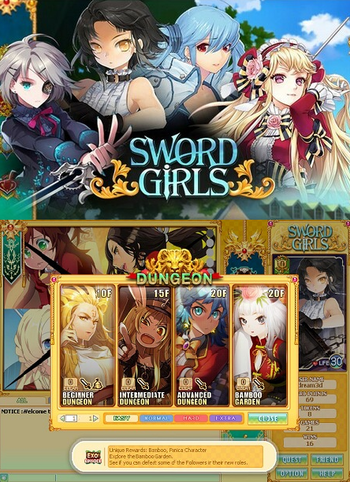 Sword Girls was a (mostly) free Card Battle Game. It originated from Korea, and had English and Japanese versions before both were shut down.

The game's setting is a world with an Improbably Female Cast. There are four factions: Vita, a high school; the Royal Academy, a private school for aristocrat girls, and their maids; Crux, a theocratic country; and Darklore, a catchall name for dark forces rejected by Crux, including vampires, Heretics and witches. The game's backstory is mostly pieced together from the flavor texts of cards.

Its gameplay is also known for being very dependent on the Random Number God. Followers, the cards you use to fight with, are AI-controlled and can sometimes make decisions against the player's wishes, making every battle a Luck-Based Mission depending on how dumb your cards feel like being.

The game is also filled with truckloads of Fanservice.

There was a series of light novels published by Novel Engine

, which compiles the scattered in-game lores together (albeit in an Alternate Universe) and a Manhwa adaptation

On November 2017, Zeonix, the developers of the game, went bankrupt, and the game's servers closed down permanently. Outside of a few unofficial PC ports, the game can't be played anymore.