That One Attack / Monster Hunter 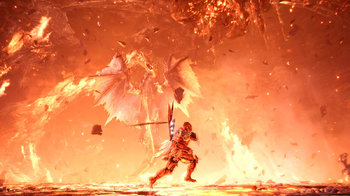 Didn't deal enough elemental damage in time? Then DIE.
Most monsters of Monster Hunter have a plethora of moves at their disposal. These suckers, on the other hand, will force you on the defensive at best and dropkick your ass back to the village or hub at worst. Most of these monsters are also either on the Goddamned Boss or That One Boss pages for a reason.
Advertisement:
open/close all folders
Series-Wide
First Generation
Second Generation
Third Generation
Advertisement:
Fourth Generation
Fifth Generation (World: Iceborne)
Fifth Generation (Rise)
Frontier/Other