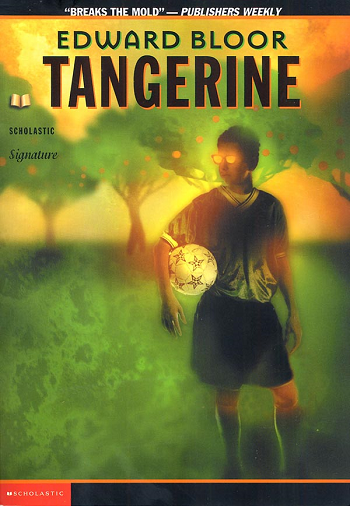 Tangerine is a 1997 young adult novel by Edward Bloor. His first published novel; it won several awards and has become a widely used book for assigned reading in schools.

The novel's protagonist, Paul Fisher, wears coke-bottle glasses due to an incident in his youth. The official story is that he stared too long at a solar eclipse, but Paul knows better than that. He's struggling to remember a moment from his past, related to his eyesight and his asshole brother Erik, that he can't dig up no matter how hard he tries. And if that wasn't enough, his family's move to Tangerine County, Florida, isn't going well, what with wild weather out the wazoo, such as sinkholes enveloping schools, and lightning striking the same place every single day. Can Paul deal with his football-hero brother, excel at soccer, and learn the truth about his past?

Unrelated to the 2015 Tangerine. Or a 2013 Estonian film Tangerines.